What Is 7/11 as a Decimal + Solution With Free Steps

The division operator is used to solve the fraction, and it appears to be the most difficult of all mathematical operators, but we can make it easier by using the Long Division method, which is simple and convenient.

So we can convert the given fraction 7/11 into its decimal value by using the long division method.

Before starting a solution for the given fraction, we will first explain the important terms used in the long division method. The terms are “Dividend” and “Divisor.”

When we solve a mathematical problem, we end up having some result, and when we solve a fraction by using the long division method, the result is referred to as the Quotient. It is the answer of a fraction in decimal form.

The solution through the long division is as shown below: 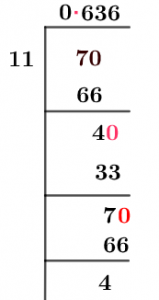 We have a fraction:

Another concept that must be defined in this context is the concept of a remaining number, which results from the division of two non-completely divisible integers. And that number is referred to as the Remainder.

We will first add a decimal point to the quotient of the provided fraction, which will add zero to the dividend’s right and give us a dividend of 70.

The remainder of the division is 4.