Graphing linear inequalities is a way of using the coordinate plane to visually show which points satisfy an inequality and which do not.

Graphing linear inequalities is very similar to graphing numerical inequalities. When we have one number, we can use a number line. When we are dealing with two variables, x and y, we can use the Cartesian plane to graph the inequality.

Graphing inequalities requires a thorough understanding of the coordinate plane, the equation of a line, and graphing lines. Make sure to review those topics before moving forward with this one.

In particular, this section will cover:

How to Graph Inequalities

Recall that a linear equation is a relationship between the independent and dependent variables, usually x and y, that can be modeled as a line in the Cartesian coordinate system. One of the most common linear equations is slope-intercept form, y=mx+b, where m is the slope of the line and b is the y-intercept of the line.

The first step in graphing linear inequalities is graphing the line. That is, if you are given any of the above inequalities, graph the line y=mx+b.

Decide on a Solid or Dashed Line

Now, we need to decide whether the graph of the line y=mx+b should be a solid line or a dashed line. This is similar to deciding whether to have an open circle or a closed circle when graphing a single variable.

That is, if our original linear inequality has a greater than or a less than sign, we use a dashed line. This means the solution to the inequality does not include points that lie on the graphed line.

Shade Above or Below the Line

Finally, we need to decide whether to shade above or below the line we graphed. This is similar to deciding whether to shade to the right or left on a number line when graphing a one-variable inequality.

Systems of linear inequalities will be connected by the words AND or OR, and these are often written in all capitals as shown here.

The word “and” in mathematics means both things must be happening. For example, in math, if something is prime and even, only the number two works.

When graphing systems of inequalities connected by the word “and,” we shade the overlap between two or more linear inequalities.

The word “or” in mathematics means “either or both.” The mathematical “or” includes the overlap between two things, whereas every day English does not include both. For example, in math, if something is divisible by 2 or 3, the numbers 4, 6, and 9 all work.

When graphing systems of inequalities connected by the word “or,” we shade anything that is a solution to at least one of the individual inequalities.

The easiest way to graph a system of two or more linear inequalities is to graph each one individually, using the three steps outlined above.

In this section, we will go over common examples of problems involving linear inequalities and their step-by-step solutions.

This is the vertical line that is two units to the right of the origin.

Finally, this is a vertical line, and we are using a “greater than” sign. Thus, we will shade to the right.

This gives the us the graph below. 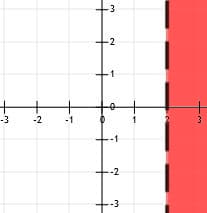 Just like last time, we will find the graph of the line y=3. This is the line that is horizontal and three units above the origin.

Since this graph is a less than or equal to sign instead of just a less than sign, we will use a solid line.

Finally, because this line is less than instead of greater than, we will shade below the line. The result is the graph shown below. 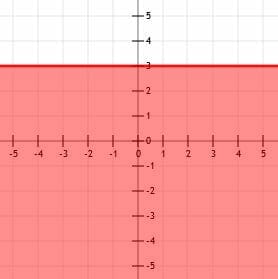 Graph the inequality y≤x. Compare this to the graph of y≥x.

We have two inequalities to graph here, but they use the same line. We need to start by graphing y=x, which is the line that passes through the origin with a slope of 1.

The first line asks us to graph an inequality that is “greater than or equal to.” This means we will shade above the line as shown. 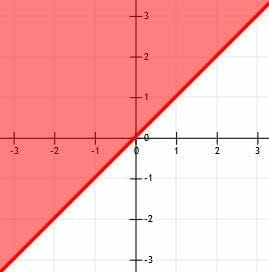 The second inequality has a “less than or equal to” sign, so we must shade below the line. 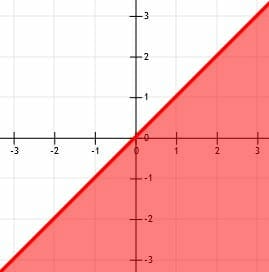 The only points that these two lines have in common is the line y=x.

Graph the system of inequalities y≥x-1 and y≤2.

We have two lines to graph here. The first is y=x-1. This line has a slope of 1 and the y-intercept (0, -1). The second is y=2, which is a horizontal line that lies two units above the origin.

Since this system is connected by an “and,” we will only shade the overlap of these two inequalities, shown in purple below. 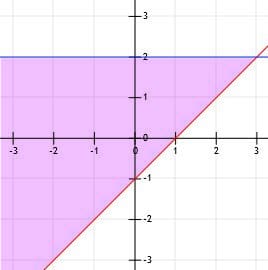 Both lines will have solid lines because both include the equality.

This system of inequalities is connected by a mathematical “or,” so we shade any region that is part of the solution to either inequality, including the overlap. 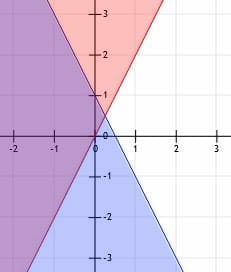