Angles of a Triangle – Explanation & Examples

We know that every shape in the universe is based on angles. The square is basically four lines connected so that each line makes an angle of 90 degrees with the other line. In this way, a square has four 90 degrees angles on its four sides.

Similarly, a straight line stretched on both sides at 180 degrees. If it turns at any point, it becomes two lines separated by a certain angle. In the same manner, a triangle is basically three lines connected at certain values of angles.

These measures of angles define the type of triangle. Therefore, angles are essential in studying any geometric shape.

What are the Angles of a Triangle? 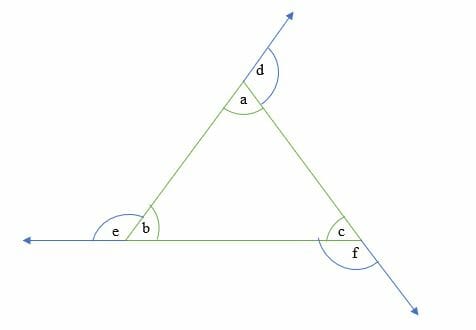 How to Find the Angles of a Triangle?

To find the angles of a triangle, you need to recall the following three properties about triangles:

Calculate the size of the missing angle x in the triangle below. 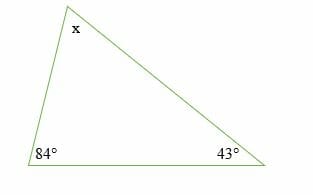 By triangle angle sum, theorem, we have,

Hence, the size of the missing angle is 53º.

Find the size of the interior angles of a triangle that form consecutive positive integers.

Since, a triangle has three interior angles, then, let the consecutive angles be:

But we know that, the sum of the three angles is equal to 180 degrees, therefore,

Now, substitute the value of x in the original three equations.

Subtract 40° on both sides.

Divide both sides by 7.

Find the value of the missing angles in the diagram below.

By triangle exterior angle theorem, we have;

Subtract 10° on both sides.

Divide both sides by 2 to get;

Let x be the common ratio of the three angles. So, the angles are,

Divide 30 on both sides.

Substitute the value of x.

Find the size of angles x and y in the diagram below.

Let the second angle be x

Calculate the size of angle p, q, r and s in the diagram below. 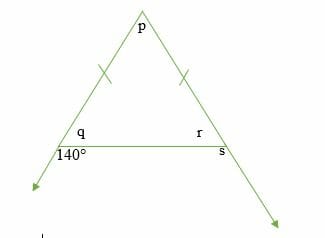 This is an isosceles triangle, so,

subtract 140 from both sides to get.