Calculus is the study of things in motion or things that are changing. It uses concepts from algebra, geometry, trigonometry, and precalculus. The word itself comes from a Latin word meaning “pebble” because pebbles used to be used in calculations.

Calculus has applications in both engineering and business because of its usefulness in optimization.

For example, an engineer could use calculus to find out the least amount of material needed for a machine to still operate correctly. Alternatively, a human resource director can use it to figure out the minimum number of employees needed for a new site to operate.

Calculus is often divided up as calculus I, II, and III.

Calculus I will typically cover both differential and integral calculus like this guide.

Calculus II explores more complex topics of integral calculus and series and sequences, while calculus III is normally the study of multi-variable calculus.

Although Isaac Newton generally gets the credit “inventing” or “discovering” calculus, the concepts of calculus were derived independently by Isaac Newton and Gottfried Wilhelm Leibnitz at about the same time. For Newton, calculus was necessary for describing the physics of gravity that he was simultaneously studying.

This guide mainly focuses on the topics learned in calculus I. It begins with an in-depth explanation of differential calculus, including limits, the product and quotient rules, the chain rule, derivatives of different functions, and optimization.

The second section deals with integral calculus, including Riemann sums, the fundamental theorem of calculus, indefinite integrals, and different methods for calculating integrals.

The final section explores the concepts of polar coordinates and parametric equations that are often covered at the end of calculus courses.

Differential calculus is concerned with rates of change and motion. It can be used to calculate the rate of change of a curve at any particular point or find the maxima or minima of curves. The functions used to derive these values are called “derivatives.” For example, the first derivative of any function can be used to find a line tangent to a curve at any given point. In the image, the line that is tangent to the function e^x at the point (0,1) is y=x+1. 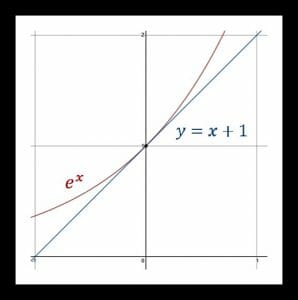 This section begins with an introduction to calculus, limits, and derivatives. It then introduces rules for finding derivatives including the power rule, product rule, quotient rule, and chain rule.

The guide also includes resources for finding the derivatives of different types of functions, including trigonometric and logarithmic functions. Next, there are resources explaining how to take derivatives of derivates and the applications of that.

Finally, the topic ends with a discussion of optimization and more advanced differential calculus subtopics.

Integral calculus makes up of the second half of the first part of calculus. It is essentially a way of working backwards from derivatives. That is, rather than finding the derivative of a function, one finds which function or functions a derivative corresponds to.

Whereas the derivative can be used to calculate the rate of change on a curve at any given point, an integral can be used to find the area under a curve over any interval. The relationship between integrals and derivatives forms the backbone of the fundamental theorem of calculus, which will be discussed in detail in this topic.

The relationship between integrals and areas under curves is best explained through Riemann sums, which are loosely illustrated in the image below. 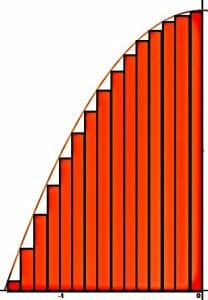 Note that the area under this curve can be nearly approximated by the sum of the area of the rectangles. If the width of the rectangles were smaller, the approximation would be even closer. This is discussed in more thoroughly in the subtopic about Riemann sums.

This guide first discusses antiderivatives, definite integrals, and methods for approximating definite integrals. It then introduces and explains the fundamental theorem of calculus. After that, the exploration of integrals continues with different methods that can be used for integration and how to integrate different functions such as exponential and hyperbolic functions. Finally, the topic ends with an exploration of more advanced topics in integral calculus. 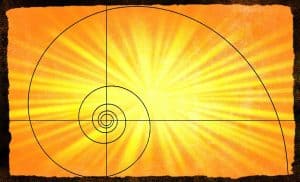 The guide ends with a review of the graphs of polar curves.