One of the important shapes in geometry is the circle. A geometry-based exam will have most of the questions consist of rectangles, triangles, and circles.

We’ve all seen circles before. They have this perfectly round shape, which makes them perfect for hula-hooping! This article will explain what a circle is, its properties, and its parts.

What is a Circle in Geometry?

The word ‘circle’ is derived from a Greek word that means ‘hoop’ or ‘ring.’ In geometry, a circle is defined as a closed two-dimensional figure in which the set of all the points in the plane is equidistant from a given point called “center.”

Never confuse a circle with a polygon. A circle is not a polygon because it is made up of curves.

The history of the circle is ancient. People used to believe that the moon, sun, and other planets are circular because there was no concept of 3D shapes—mathematicians study circles which helped them develop calculus and astronomy.

In 1700 BC, Rhind Papyrus proposed a method to find the area of a circle. At that time, the value of pi was not accurate. In 300 BC, Euclid stated the properties of circles in his book. Finally, in 1880 AD, a German mathematician, Lindemann, solved the issue with pi’s value and proved that pi is a transcendental (not a root of any polynomial with rational coefficients) number.

Circles are all around us! Some of the real-world examples of circles are:

Therefore, a circle is an important shape in the field of geometry. Let’s look at the parties and properties of a circle.

Parts of a Circle 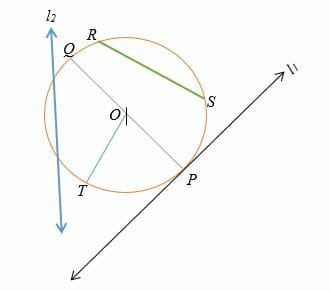 Line OT is the radius of the above circle.

Line PQ is the diameter of the circle. 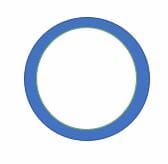 Properties of a Circle

Which of the following things is circular in shape?

All of the mentioned shapes are circular in shape.

Therefore, the correct choice is D.

A circular bowl has a diameter of 9 inches. What is the radius of the bowl?

We know that the radius of the circle is half of the diameter.

Which of the following parts of a circle can also be a chord of a circle?

A chord is a line segment with both the endpoints on the circle. The diameter of a circle is the longest chord.

Hence, the correct choice is B.