Given an angle ABC, it is possible to construct a line BF that divides the angle into two equal parts using only a straightedge and compass. Such a line is called an angle bisector.

Constructing an angle bisector requires that we construct an isosceles triangle BDE inside the angle and then construct an equilateral triangle DEF that shares a base with BDE. If we then construct the line BF, it will divide the original angle ABC into two equal angles.

Doing this requires that we have a thorough understanding of the basics of construction. It is also a good idea to review the equilateral triangles’ construction, covered in the construction of a 60-degree angle.

This topic will go over:

How to Construct an Angle Bisector

Suppose we are given an angle ABC. It can be acute, right, or obtuse. It doesn’t matter. 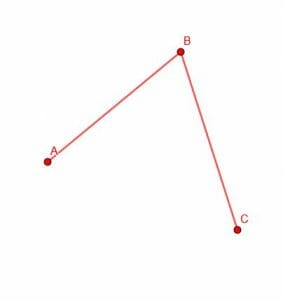 To do this, we will need our straightedge, compass, and a few of Euclid’s theorems. Specifically, we need to know that if two triangles have all three sides congruent, then the triangles are congruent. This means that their corresponding angles will be equal.

How to Construct an Angle Bisector with Compass

First, we pick a point D on AB. 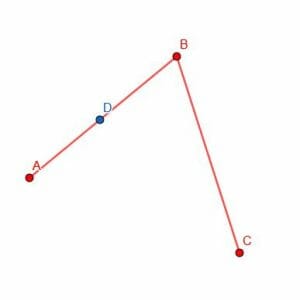 Next, we can place the point of the compass at B and the pencil tip at D. Then, we can trace out the circumference of a circle with center B and radius BD. Mark the place where this circle intersects BC as E.

Note that in practice, it’s sufficient to create an arc from D to E instead of creating the whole circle. Since the whole circle is necessary for the proof, however, we will construct it here. 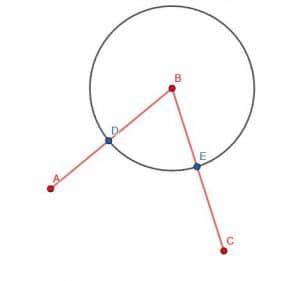 Next, we will connect D and E using our straightedge. Then, we will construct an equilateral triangle with DE as an edge. Recall that we do this by creating two circles with radius DE. One will be centered at D, while the other will be centered at E. We will call the intersection F and construct the lines DF and EF. We want this triangle to point away from B, as shown. 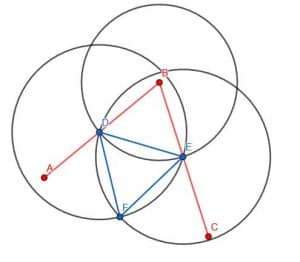 Finally, we can connect points B and F with our straightedge. The line BF will create two angles, ABF and FBC, that are equal to each other. 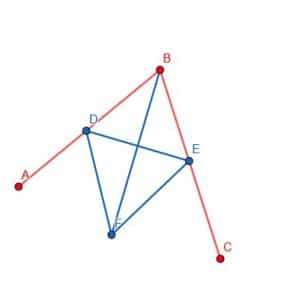 In this section, we will go over common problems that involve the construction of an angle bisector.

Divide the triangle in two using an angle bisector. Are the two parts equal in area? 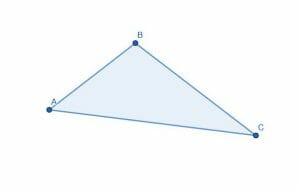 We’ll divide the angle ABC as before. Rather than constructing a new point D, we can use the endpoint of the shorter side, A.

Then, we draw a circle with center B and radius BA and label the intersection of this circle with the line BC as D. 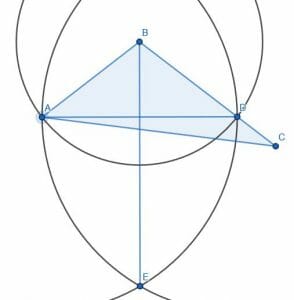 If we call the intersection of the lines AC and BE G and connect CG, we can see that the triangle AFG is equal to CFG. However, there is still an additional area remaining to the right of BE. Consequently, the triangle has not been cut in half even though the angle ABC has been bisected.

Divide the hexagon into two halves using an angle bisector. 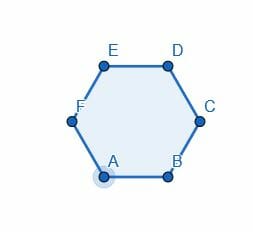 In this case, we can use any angle. We’ll use the angle ABC to be consistent, though. A and C are already equidistant from B because this is a regular hexagon. This, we can connect them with a line and construct an equilateral triangle ACG. Then, we connect B and G to bisect the angle ABC. 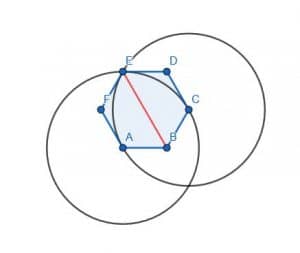 Note, however, that G and E are the same point. This makes sense because A and C are separated by one angle, but so are the pair A and E and the pair C and E.

Thus, bisecting the angle ABC does bisect the hexagon. 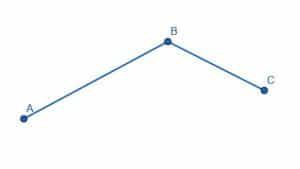 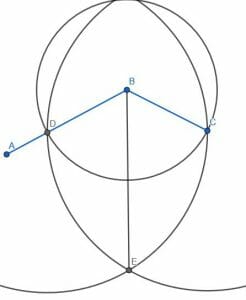 Now we need to bisect the angles ABE and CBE.

Thus, we have cut the original angle ABC into four equal parts. 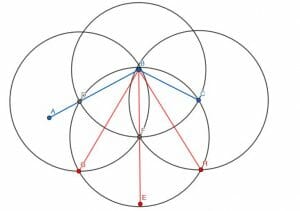 Divide the angle greater than a straight line into two equal parts. 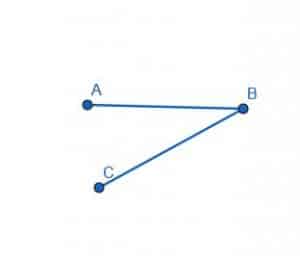 Let’s do this. First, we bisect the acute angle ABC as before, finding a point on BC equal in length to BA. We’ll call this point D. Then, we construct two circles of length AD, one centered at A and one at D. Drawing a line from B to this intersection, E, gives us an angle bisector. We can then extend the line through the circle we constructed to find the point D. 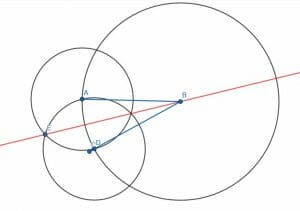