Constructing a line parallel to a given line that goes through a given point involves knowing some facts about parallel lines and copying angles.

To do this, we will need to construct a transversal. This is a line that crosses two parallel lines. Several pairs of equal angles are created when we make such a line. Then, as long as we know how to copy angles, we can use this fact to create parallel lines.

Before moving on in this section, it is good to review construction and all of the previous constructions we have made since they build on each other.

In this section, we will cover:

How to Construct a Parallel Line

There are several creative ways to construct parallel lines without needing to copy an angle.

First, we can create two equilateral triangles that are the vertical mirror image of each other. The bases of two such triangles would be parallel. However, we can only create such parallel lines at given intervals.

There is another way to make a line parallel to a given line that goes through a given point. Doing this, however, requires that we know a little bit about the angles formed when a transversal line cuts two parallel lines.

A transversal is a line or line segment that intersects two parallel lines, as shown. 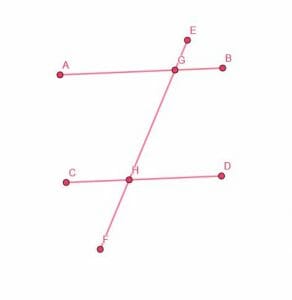 Euclid also proves that if a third line cuts two lines and the angles created meet the specifications outlined in the previous paragraph, then the two original lines are parallel. That is, knowing these angle measures is enough to prove two lines are parallel to each other.

How to Construct a Parallel Line Through a Point

We can now use this information to help us construct a line parallel to a given line that goes through a point.

Let’s let AB be the given line and let C be the point. 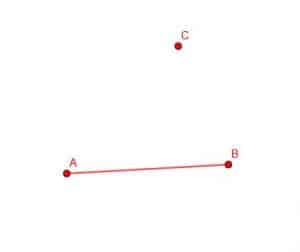 We start by picking a point at random on AB, which we will call D. Then, we connect D and C. 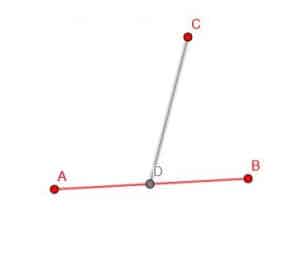 Now, we will use the properties of angles and transversals to construct the parallel line. First, however, we need to go over how to copy an angle.

To copy an angle, we need to construct a triangle on the angle. We’ll do this with angle CDB as shown. 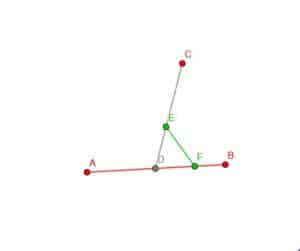 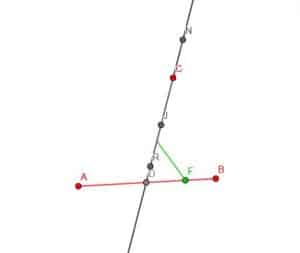 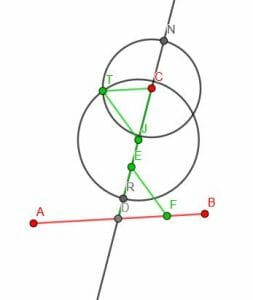 If we create two circles, one with center C and radius CN and the other with center J and radius JR, they will intersect. Let’s call this point T. If we connect CT and JT, we will create a triangle. This triangle, JCT is equal to EDT. We can imagine flipping the triangle EDT vertically and then horizontally and then shifting it upwards to get this new triangle.

Specifically, EDF is equal to JCT. If we draw a line extending CT, this line is parallel to AB. We know this because the transversal CD creates two angles, EDF and JCT, which are equal. Euclid calls these angles “alternate angles,” and showing they are equal is sufficient to show that the lines are parallel. 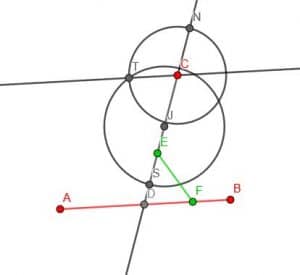 In this section, we will go over common examples of problems involving constructing parallel lines.

If alpha and beta are equal, are the following three lines parallel? How do you know? 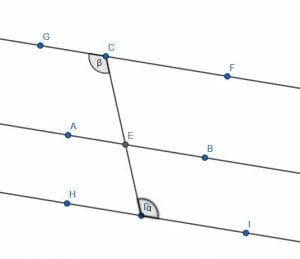 If angle alpha and angle beta are equal, they are what Euclid calls “alternate angles.” If a line cuts through two lines and makes the alternate angles equal, it is sufficient to know that the two lines are parallel to each other.

What about the third line, the one in the middle?

We can then use this point to make an additional circle, namely one with center C and distance CA. B will also lie on the circumference of this circle because B and A are equidistant from C. 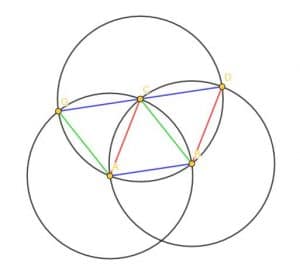 Consider the blue lines first. Note that the line CA cuts the blue lines AB and GD. When it does, it forms the angles GCA and CAB, which are alternate angles. These are also angles of an equilateral triangle, so they are consequently equal. As we said above, showing that alternate angles are equal is sufficient to show that the two lines are parallel. 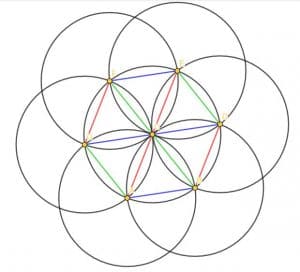 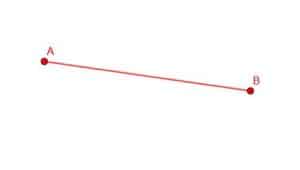 Then, we can pick a point E on this new line and construct another perpendicular line segment. We will call this segment ED.

Now, note that DEC is a right angle, as is ECA. Since these are alternate angles formed when the line EC cuts the lines ED and AB and they are equal, ED is parallel to AB. 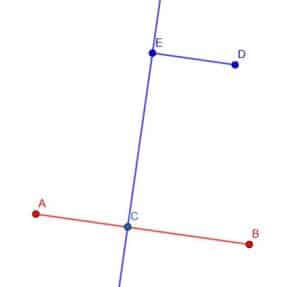 Construct a parallelogram that has AB and BC as two of its sides. 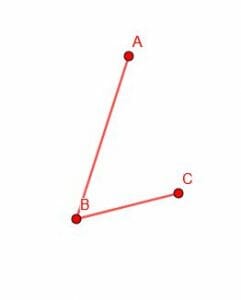 We will follow the same procedure as before, beginning with the construction of a line parallel to AB at C.

BC is already connected, so we create a triangle EF as shown. 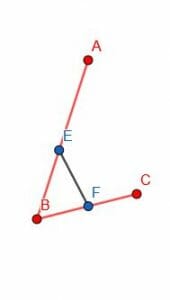 Next, we extend CB and cut segments equal to EF, FB, and EB. We want the segments of length FB and EB to intersect at C, as shown. 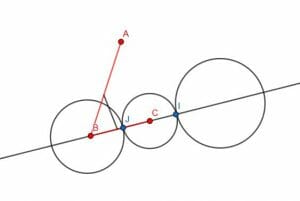 We can then inscribe circles centered at C with radius CB and centered at J with radius JI. If we draw a line through these two circles’ intersection, which we will call K and C, we get a line parallel to AB. 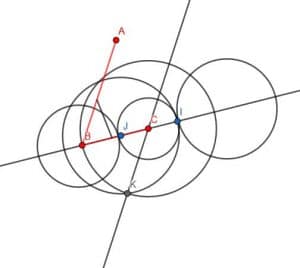 We can do the same thing to construct a line parallel to BC at A. This line will intersect the line we constructed parallel to AB at C. If we call this intersection D, we end up with a figure like the one shown below. 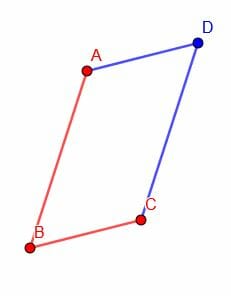 Construct a line parallel to the given line through the point C.

This example actually serves to illustrate one constraint about constructing parallel lines. To do that, we have to have a given point that does not lie on the original line.

This is because, by definition, parallel lines are lines that never intersect in the Euclidean plane. If a parallel line ran through C and the original line, the two lines would intersect, making them not parallel in the first place.

Therefore, there is no solution.