Direction of a vector – Explanation and Examples

The Direction Of A Vector – Explanation and Examples

Keeping the importance of direction in mind, let’s move forward.

We will be covering the following topics in this section:

What Is The Direction Of A Vector?

A vector is a physical quantity described by a magnitude and direction. A vector quantity is represented by a vector diagram and hence has a direction—the orientation at which the vector points is specified as the direction of a vector.

In convention, where its vector diagram represents a vector, its direction is determined by the counterclockwise angle it makes with the positive x-axis. According to a scale, the vector diagram is a line with an arrowhead that denotes the direction of the vector.

This is why, for us to describe a vector, the direction is just as vital and the magnitude. If we were to say that the chocolates are 3 meters outside of the classroom towards the North, it would make more sense.

We have seen in the above-mentioned example how the direction is important to a vector quantity.

Similarly, another vector can be 65° South of the West. This means that it is directed 65° about the tail from the West toward the South. The green vector denotes this.

Let’s see this vector diagram. If a vector is said to have a direction of 50°. The trick to figuring it out is to pin down the tail of the vector aligned with the due East or the x-axis. Now rotate the vector 50° counterclockwise about its tail.

Now take another example. Suppose a vector has a direction of 200°. This means the vector’s tail is pinned down at the East and is then rotated 200° about counterclockwise. 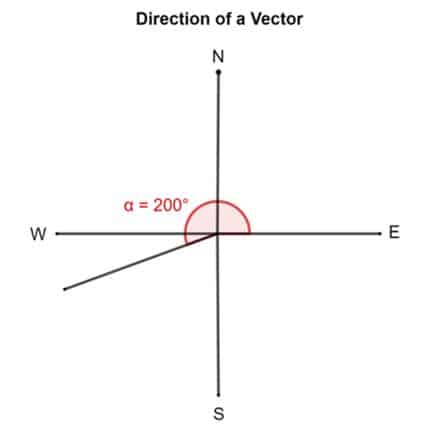 Similarly, a Rectangular coordinate system can also be used. In that case, the angle will be calculated from the positive x-axis.

Now, let’s consider some examples to understand this concept better. 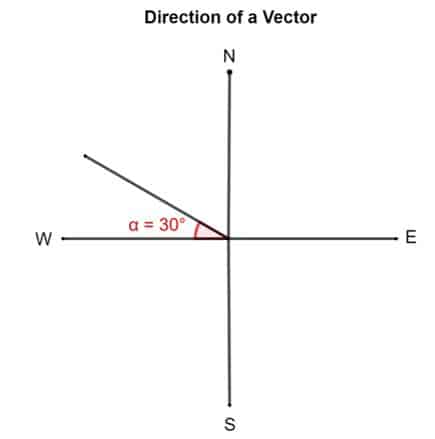 Draw a vector with direction 60° East of North. 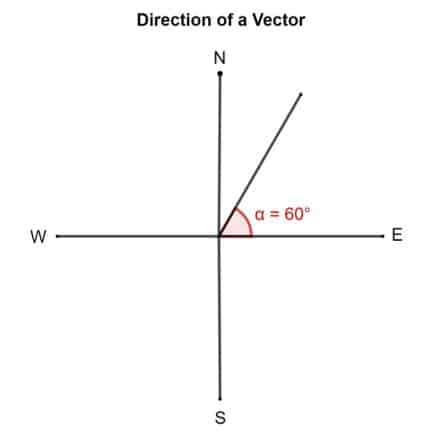 How To Find The Direction Of A Vector?

The direction of a vector is determined by the angle it makes with the horizontal line.

There are two methods of finding the direction of a vector:

However, here is the problem: This method is only for basic understanding. It gets complicated if you have to add multiple vectors and does not always give the most accurate result. There is always a chance of human error. Therefore, we have the second method:

We use the inverse tangent function to find the angle it makes with the horizontal line.

This is possible if you have the initial and final coordinate points of a vector in a plane. It is given by:

A vector is directed from origin to the (3,5). Determine its direction.

Here we can see that,

Now, consider a case where the tail is not located at the origin, but rather the vector is placed somewhere else in the plane. In this case, the formula is modified as follows:

By Pythagorean property, we know:

So, the formula is modified as:

The angle given by this is from the horizontal line, running parallel to the x-axis.

Let’s solve some examples to understand this concept.

The Conventions For The Direction Of A Vector

Let’s move on to a much tougher case.

We have seen that in the above example, the vector lies in the First Quadrant. Let’s see how it works for the rest of the Quadrants. This can be determined by the signs of the vector’s coordinates, which determine the quadrant in which the angle lies.

For this, certain conventions should be followed:

Let’s under this with the help of examples.

Find the direction of a vector directed from origin to the coordinates (6, -7).

We will take help from the inverse tangent formula:

Here we can see from the coordinates of the vector that it was lying in Quadrant IV.

Now, here is the deal:

The formula gives the shortest angle from either the positive or negative x-axis. The convention is to represent the angle with a positive sign from the positive x-axis. For this, we subtract from 360 ° to the obtained angle.

By looking at the coordinates, we know that the vector lies in Quadrant II:

from the positive x-axis in a counter-clockwise direction.

For Finding The Direction Of The Resultant Vector

Moving on, let’s see how we can find the direction of the resultant of two or more vectors.

Following are the step to calculate the direction of a resultant of two or more vectors:

Let’s say you have vectors A and B, and you want to find their resultant and direction.

All the vector diagrams are constructed by using GeoGebra.