The circular geometry is really vast. A circle consists of many parts and angles. These parts and angles are mutually supported by certain Theorems, e.g., the Inscribed Angle Theorem, Thales’ Theorem, and Alternate Segment Theorem.

We will go through the inscribed angle theorem, but before that, let’s have a brief overview of circles and their parts.

Circles are all around us in our world. There exists an interesting relationship among the angles of a circle. To recall, a chord of a circle is the straight line that joins two points on a circle’s circumference. Three types of angles are formed inside a circle when two chords meet at a common point known as a vertex. These angles are the central angle, intercepted arc, and the inscribed angle.

For more definitions related to circles, you need to go through the previous articles.

In this article, you will learn:

What is the Inscribed Angle?

An inscribed angle is an angle whose vertex lies on a circle, and its two sides are chords of the same circle.

On the other hand, a central angle is an angle whose vertex lies at the center of a circle, and its two radii are the sides of the angle.

The intercepted arc is an angle formed by the ends of two chords on a circle’s circumference. 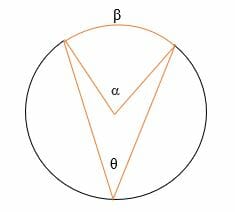 In the above illustration,

What is the Inscribed Angle Theorem?

The size of an inscribed angle is equal to half the size of the central angle.

Where α and θ are the central angle and inscribed angle, respectively.

How do you Prove the Inscribed Angle Theorem?

The inscribed angle theorem can be proved by considering three cases, namely:

Case 1: When the inscribed angle is between a chord and the diameter of a circle: 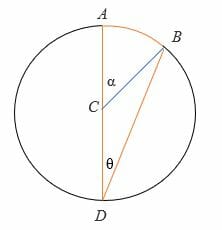 Subtract 180 on both sides.

Case 2: when the diameter is between the rays of the inscribed angle. 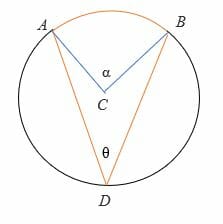 Case 3: When the diameter is outside the rays of the inscribed angle. 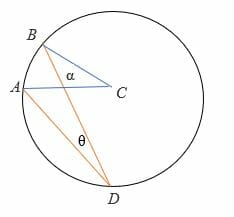 ⟹ By substitution, we get,

Find the missing angle x in the diagram below. 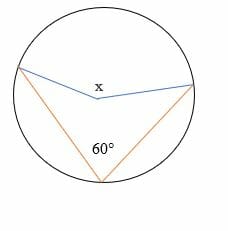 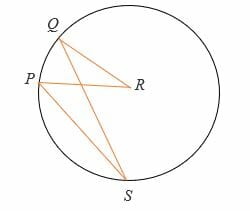 Subtract 20° on both sides.

Divide both sides by 2.

Solve for angle x in the diagram below. 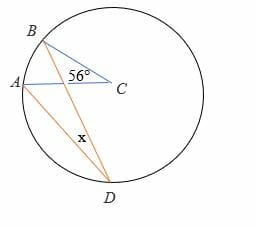 Divide both sides by 2. 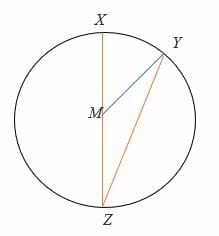 And by inscribed angle theorem,