Vector fields allow us to exhibit relationships between objects that expand over a wide region of the plane (or even space). In Physics, for example, we use vector fields to describe the object’s magnetic or electric fields. These are also essential when studying large-scale occurrences such as the varying motions of water in a river or the gravitational field between astronomical objects, so we must understand how vector fields work.

Have you seen diagrams filled with arrows (or vectors) in a plane or space? We call these diagrams a vector field. A vector field within a domain of either a plane or a space represents a vector-valued function. For each point in the plane (or space), the vector field assigns a vector that is associated with it.

What Is a Vector Field?

Keep in mind that vector fields are continuous when the components of the function are continuous as well. Vector fields such as the radial and rotational fields are represented in the $xy$-plane with graphs that look similar to the diagram shown above. Before we learn how to draw more vector fields, let us first show you how to find a vector associated with a given point.

This step is crucial in the later section when we start learning how to construct vector fields given a vector function. 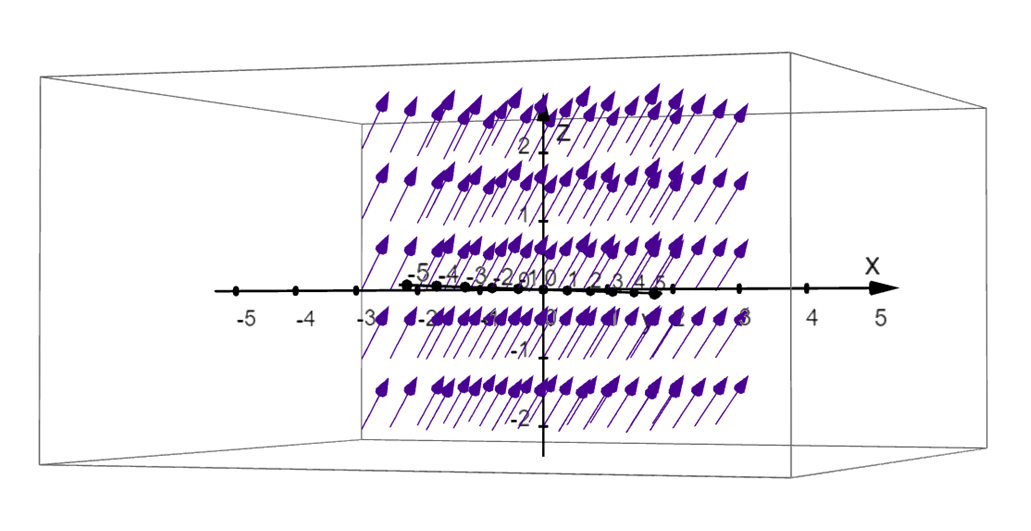 Apply a similar process to find a vector in space associated with $\textbf{F}(x, y, z)$ that passes through the point, $(x_o, y_o, z_o)$. We use vector fields in $\mathbb{R}^3$ when representing large regions such as gravitational fields.  In the next section, we’ll learn how to represent different vector functions by constructing their graphs in a plane or in space.

How to Graph Vector Fields?

We can graph the vector field using the components of the vector function or the given unit vectors of the function. Did you know that the actual graph of a vector field has at least four dimensions? That’s why we simplify its representation by constructing a vector field in $\mathbb{R}^2$.

Here’s a breakdown of the steps to remember when sketching the vector field in a 2D-coordinate system: 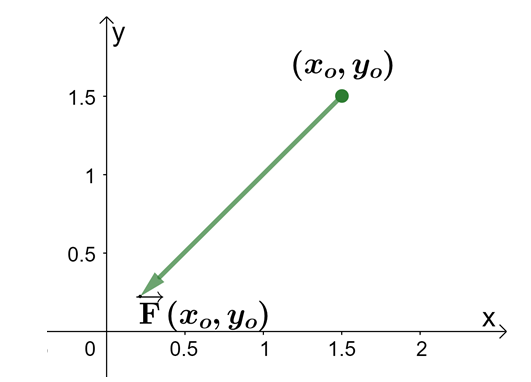 Another way for us to scale vectors in these diagrams is by normalize the vectors to shorten lengths of the vectors.

To better understand how the process works, let’s go ahead and sketch the vector field, $\textbf{F}(x, y) = 2x \textbf{i} + 2y \textbf{j}$. We begin by finding vectors throughout the four quadrants of the two-dimensional coordinate system. Evaluate each assigned point to find the components of the vectors.

Use these vectors and sketch some of them on the $xy$-plane to give you an idea of how the vector field’s shape would look like.

Graphing vector fields in $\mathbb{R}3$ requires us to use computing and graphing systems. Most of the time, it is impossible for us to sketch vector fields by hand alone. For simpler vector-valued functions such as $\textbf{F}(x, y, z) = <2, ,2, z>$, we use the constants to determine which of the components will remain constant. For this example, the $x$ and $y$ components are constant, so we can visualize how the vector field looks like on the $xy$-plane. 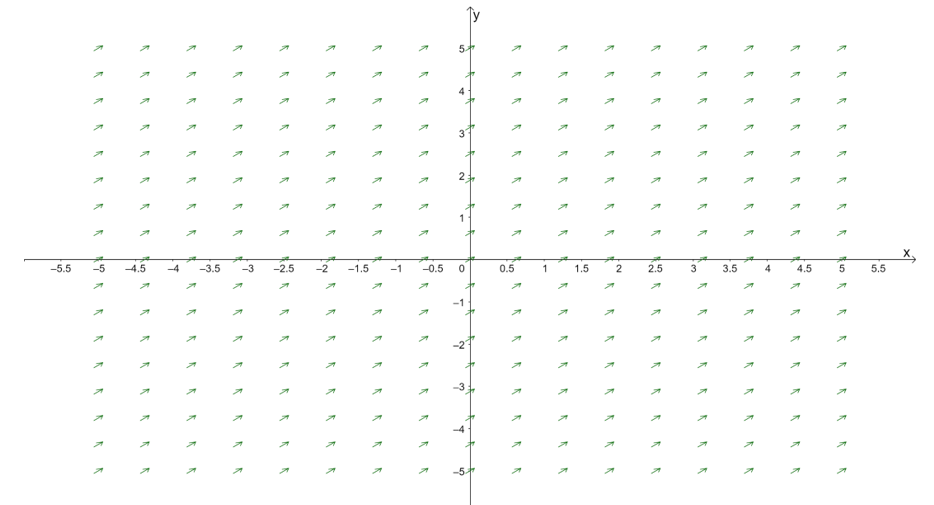 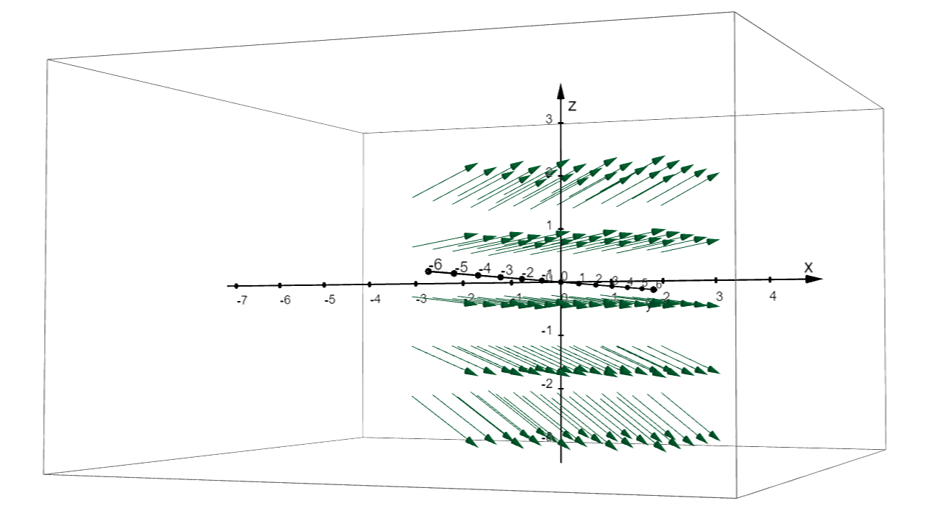 Here’s the diagram of the vector field representing $\textbf{F}(x, y) = <2, 2>$ in $\mathbb {R}^3$. We used GeoGebra to graph this 3D vector field, but you can definitely use other graphing systems!

To find the vector associated with a given point and vector field, we simply evaluate the vector-valued function at the point: let’s evaluate $\textbf{G}(-1, 4)$.

When given a vector field, we can show that it is a unit vector field by checking if its magnitude is equal to $1$. Recall that we can calculate the magnitude of the vector function by adding the squares of the components and taking the square root of the result.

When sketching vector fields, our first goal is to set up a table of values containing vectors evaluated from selected points. Here’s a summary of the vectors associated with the following points:

Now that we have our initial vectors, it’s time for us to graph these vectors on the $xy$-plane. For example, if we have $(1, 0)$ as the point, we graph the vector with $(1, 0)$ as its initial point and $(0, 1)$ as the endpoint. Do the same for the first four vectors and you should have the graph shown below. 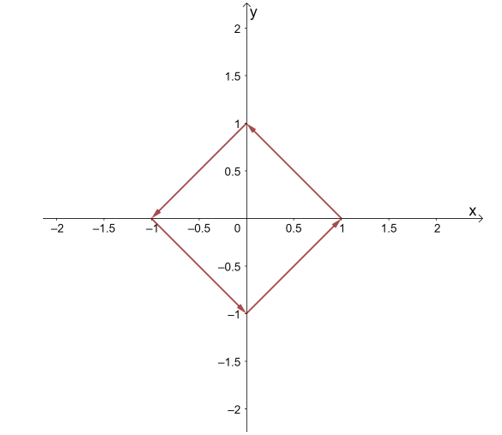 If we continue sketching more vectors, we’ll end up with the vector field shown below. As we have expected, the vectors look like they’re rotating around the center in a counterclockwise direction. 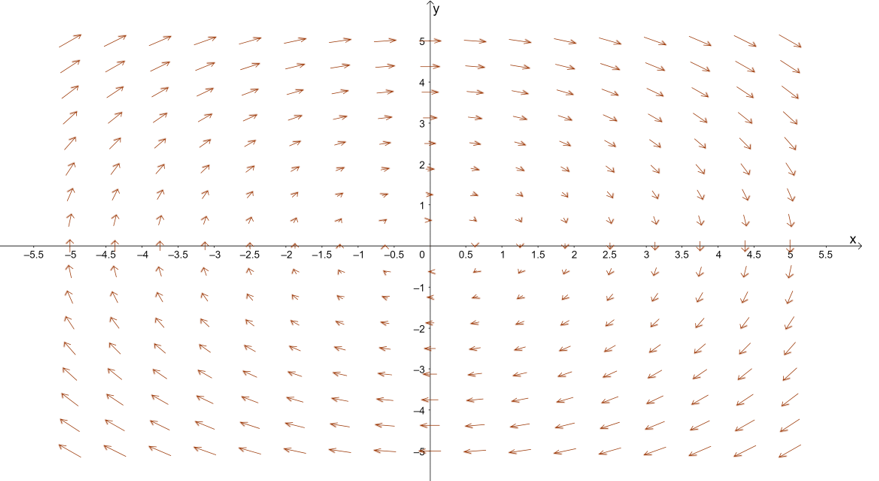 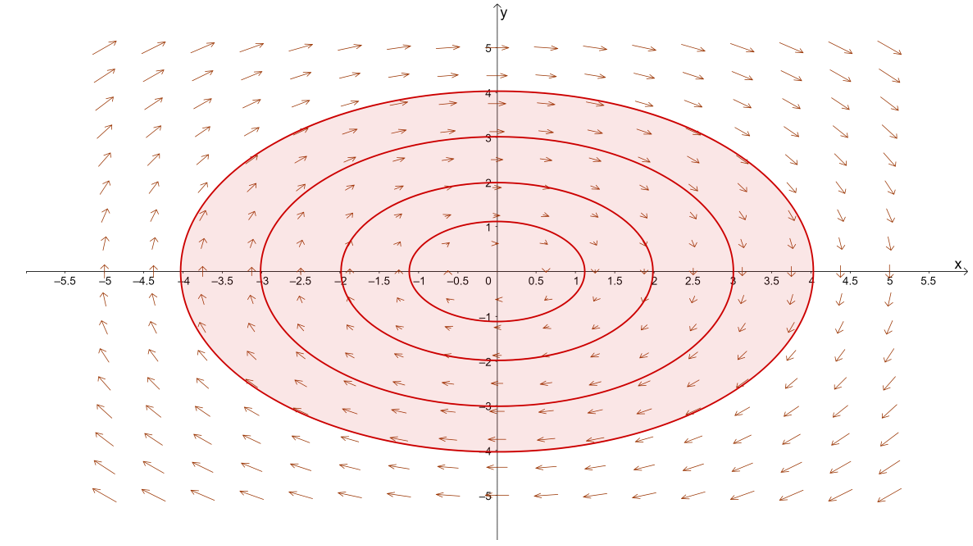 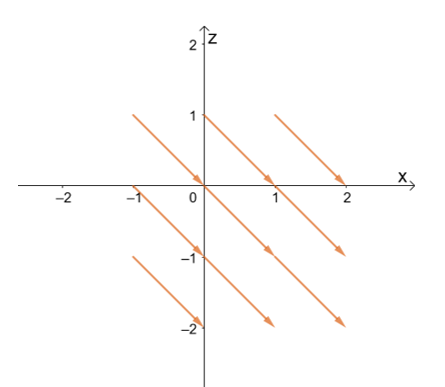 To start sketching the vectors, assign points for $(x, z)$ and from the point, move $1$ unit to the right then move $1$ unit downward. This position will be the endpoint of the vector.  Try graphing the nine vectors shown above using this process. Once you have the hang of it, continue graphing more vectors and it should lead you to the vector field in $xz$-plane as shown below. 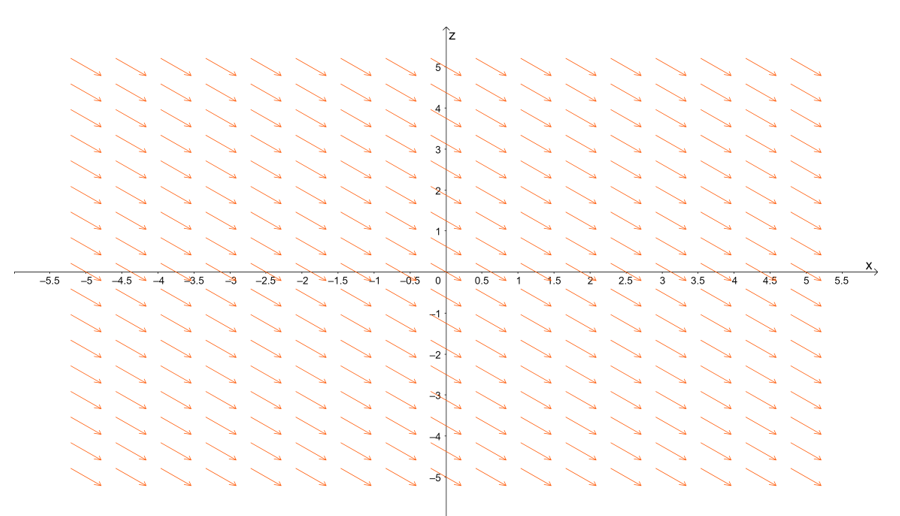 This gives you an idea of the direction of the vectors once we generate the graph of the vector field in $\mathbb{R}^3$. Since $y$ is dependent on the value of $z$, we use this fact to predict how the planes would behave in space. 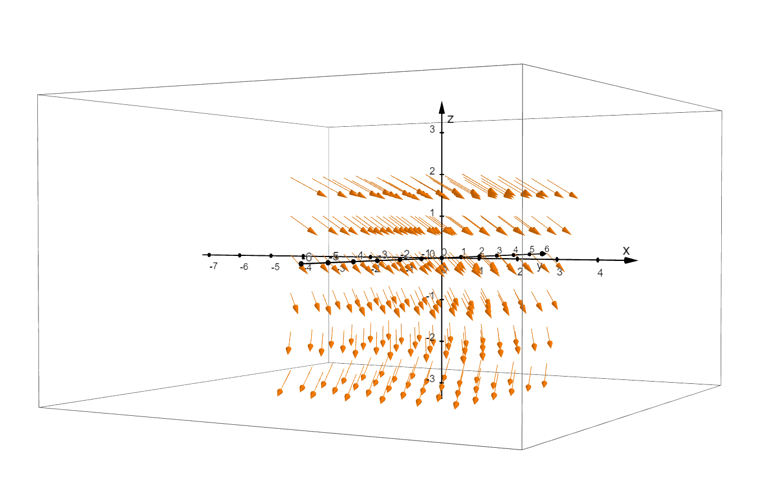 The graph above shows the generated vector field, $\textbf{G}(x, y, z) = <1, z, -1>$, in space. As we have predicted, the arrows are facing downwards and their positions only vary with respect to $z$. Use a computing system and try to generate this vector field in a three-dimensional coordinate system and see if it looks similar to the one we presented for you! 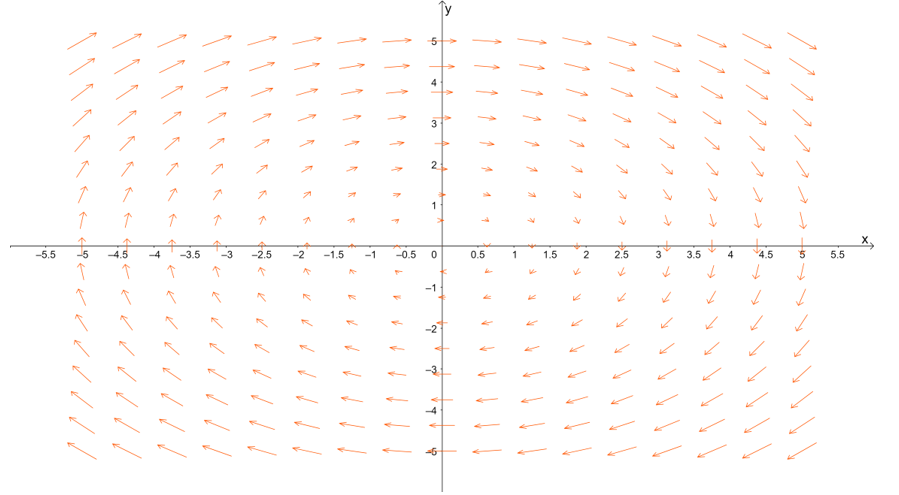 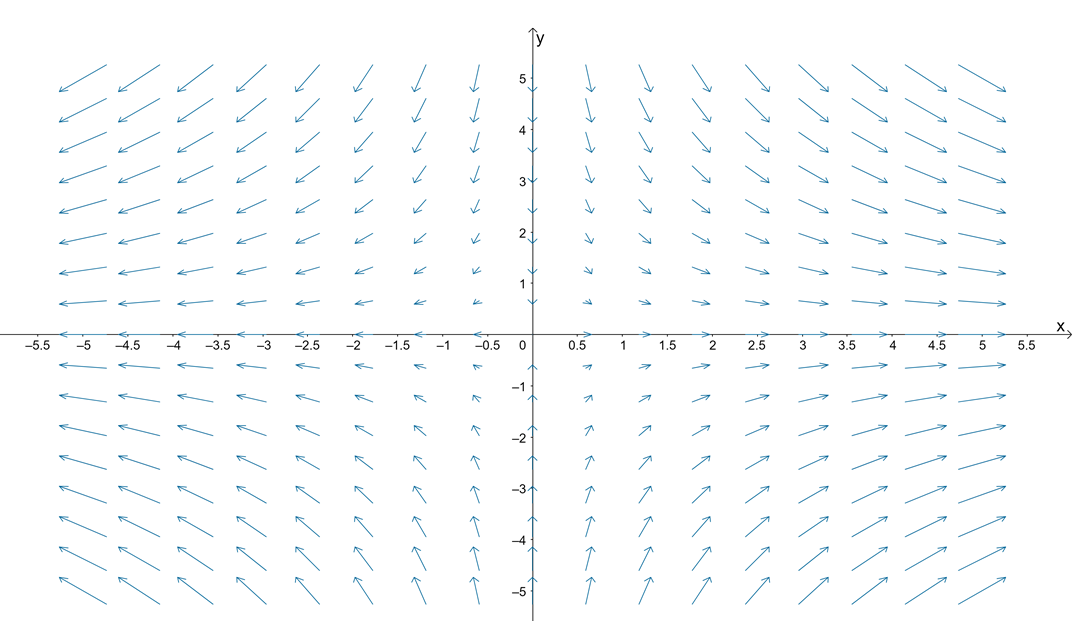 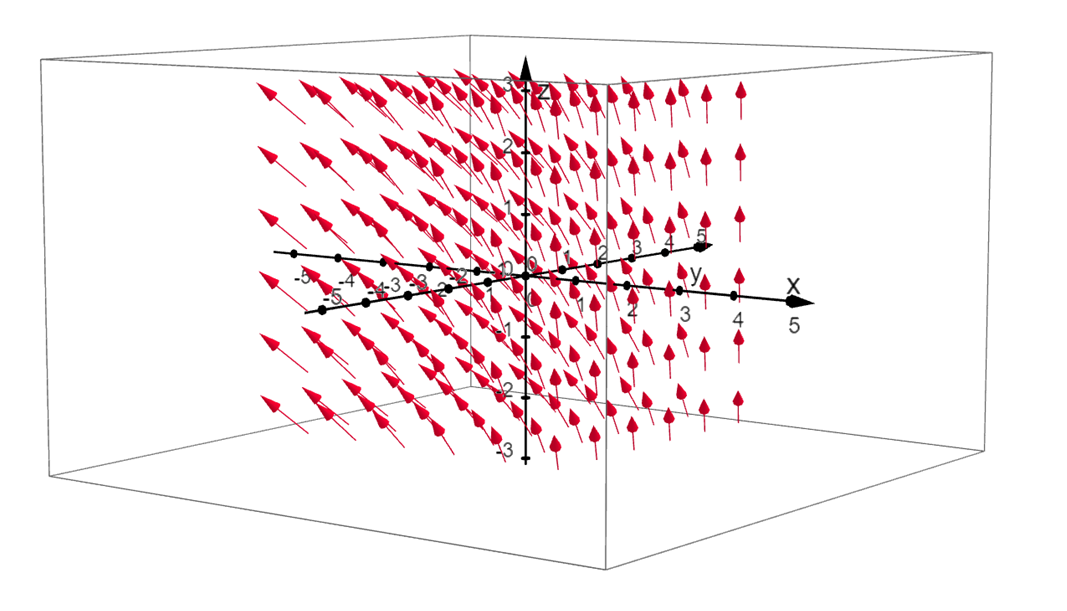