In this article, we are going to learn what vertical angles are and how to calculate them. Before we begin, let’s first familiarize ourselves with the following concepts about lines.

What are intersecting and parallel lines?

Parallel lines are lines that do not meet at any point in a plane.

Line AB and line CD are parallel lines because, they not intersect at any point.

What are Vertical Angles?

Real-life settings where vertical angles are used include; railroad crossing sign, letter “X’’, open scissors pliers etc. The Egyptians used to draw two intersecting lines and always measure the vertical angles to confirm that both of them are equal.

In the diagram above:

Proof of the Vertical Angle Theorem

We can prove in the diagram above that.

We know that angle b and angle d are supplementary angles i.e.

We also know that angle a and angle d are supplementary angles i.e.

We can re-arrange the above equations:

Comparing the two equations, we have:

Vertical angles are supplementary angles when the lines intersect perpendicularly.

How to Find Vertical Angles?

There is no specific formula for calculating vertical angles, but you can identify unknown angles by relating different angles as shown the examples below.

Calculate the unknown angles in the following figure. 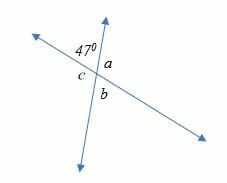 Determine the value of θ in the diagram shown below. 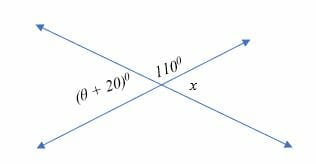 Therefore, the value of θ is 50 degrees.

Calculate the value of angle y in the figure shown below. 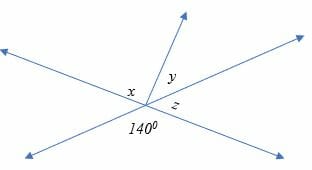 Vertical angles have many applications that we see or experience in our daily lives.