A 3-D vector is defined as:

In this topic, we shall discuss the following points in detail:

A 3-D vector is a vector represented in a 3-D plane having three coordinates; x, y, and z.

As in the previous sections, we have learned and discussed the vectors in 2-dimensional space. To avoid the computational complexity and simplify the idea so that we can understand the concept easily, it’s time to learn about 3-D vectors.

For example, if we need to specify the direction of any rigid object or body such as cars, airplanes, robots, etc., one would normally think that he needs three coordinates to define the position of the objects x, y, and z-axis and that is completely correct. So, to describe the impact of all the features, we need to use three-dimensional space.

Similarly, if we consider a map in 2-D, it’s only useful for navigating from one point to another. Still, if we need to specify various landscapes and environments, only a 2-D description of a map is not enough. That’s why it is necessary to understand the concept of 3-D vectors in a 3-D coordinate system and their properties.

A 3-D vector is like a 2-D vector in all aspects, but in the case of a 3-D vector, we need to keep track of one more direction. 3-D vector operations are analogous to 2-D operations with just an added computational step. We can do various computations like finding the angle between two vectors, scalar multiplications, etc. 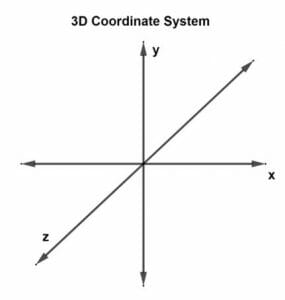 A vector drawn in a 3-D plane and has three coordinate points is stated as a 3-D vector. There are three axes now, so this means that there are three intersecting pairs of axes. Each pair forms a plane, xy-plane, yz-plane, and xz-plane. A 3-D vector can be represented as u (ux, uy, uz) or <x, y, z> or uxi + uyj + uzk.

How To Find The Magnitude Of A 3-D Vector?

The magnitude of 3-D vectors is calculated in a similar way with the addition of one more coordinate.

Where ux, uy, and uz are the magnitudes of coordinate axes. 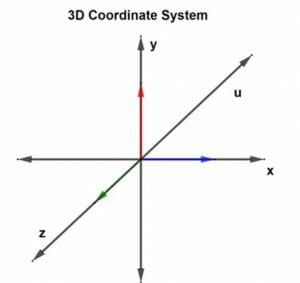 Let us have a better understanding of the concept with the help of an example.

Calculate the magnitude of the following 3-D vectors.

Let’s evaluate for the equation 3:

So, in the above examples we have calculated magnitudes of 3-D vectors.

What Is A Displacement Vector?

The displacement vector is defined as:

“A vector that explains about change in the position of the object is called a displacement vector.”

Let us consider a vector AB whose starting point is A (x1, y1, z1), and the ending point is B (x2, y2, z2). It has some magnitude and direction, and in this case, the direction is defined to be from A to B.

The coordinates of the displacement vector are

Therefore, the magnitude is given as:

To find the distance between two points in a 3-dimensional plane, we will use the following formula:

The distance between the two points is 5.38 m.

Direction Of A Vector Determined By The Unit Vector

Then, the direction vector is given as,

Let’s solve some examples to imply this concept on 3-D vectors.

The magnitude of the given vector is given as:

The direction of the 3-D vector is given by unit vector as follow:

The magnitude of the given vector is given as:

The direction of the vector is given by unit vector as follow:

Let us consider two 3-D vectors u and v. The scalar product of two vectors in 3-D space is given as:

The following steps must be followed to calculate the angle between two 3-D vectors:

Similarly, the angle between two 3-D vectors can also be calculated by using a cross product by following the same steps as discussed above, and the only difference is that it will have sin instead of cos and generalized formula of cross-product in order two find out the result.

Let us understand the concept with the help of an example.

Follow the following steps to calculate the angle between two vectors.

Magnitude of u is given as,

Magnitude of v is given as,

Now, as a final step put all the values into the formula in order to calculate the value of θ.

So, converting the angle into degrees,

To graph a 3-D vector, we will consider the following analogy.

Let us consider a 3-D coordinate system with 3 axes x, y, and x-axes, which can also be denoted in standard unit vectors such as i, j, and k. As shown in the figure, the labeled sides are positive x-axes, positive y-axes, and positive z-axis, and the unlabeled sides are regarded as negative axes. The intersection of three perpendicular axes is called origin O. So, with these axes, any point A in space can be assigned three coordinates A = (A1, A2, A3).

Let’s consider a person standing near the corner of a room and looking down at the point where walls meet the floor. So, that intersection can be visualized as a 3-D axis. The floor and the wall to the left of the person intersecting each other in a line can be regarded as positive x-axes. The floor and the wall intersecting towards the right side of the person are y-axes. The walls intersecting in a vertical line are positive z-axis. The opposite part of each is regarded as a negative part of each axis.

A vector is drawn as blue with its tail fixed at the origin and arrowhead pointing in the direction in the figure below. Now, draw the vector’s projection on three axes, which are shown in red, which are the coordinates of the given vector. 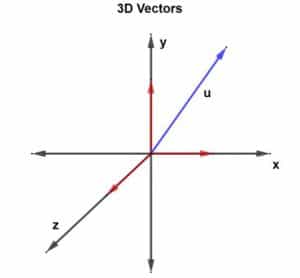 Just as in two-dimension, we can also denote a three-dimensional vector in terms of a unit vector i, j, and k. These are the unit vectors in the above positive axes. A 3-D vector can be dented as A = A1i + A2j + A3k where A1, A2, and A3 are the coordinates of a 3-D vector.

There are various 3-D vectors plotting and graphing software that can be used to visualize and draw 3-D vectors and understand their specifications properly.

All the vector diagrams are constructed using GeoGebra.