However, if he/she is tested positive for that disease, the probability becomes very high (the probability is still not 1 because no test is perfectly accurate). Such events are termed dependent events.

Two events are said to be dependent events if the occurrence of one event changes the probability of occurrence of the other event.

To understand the concept of dependent events, it is advisable to refresh the following topics:

What Are Dependent Events:

How to Tell If Two Events Are Dependent

To analyze whether two events are dependent or not, we first need to understand the concept of conditional probability.

How to Solve Dependent Events

Let us consider an example to see how to solve dependent events using the above definition.

Example 2:
We toss a coin three times. Let $E1$ is the event that the first toss results in Heads. Let $E2$ is the event, the third toss is Tails, and let $E3$ is when we get an even number of tails.

We list the various relations between $A$ and $B$, if $A$ and $B$ are dependent

There are many scenarios of interest where we repeat the same experiments many times. For instance, tossing a coin or picking a card from a deck, etc. Tree diagrams offer a useful tool to analyze such events. Let us consider how to make tree diagrams when we know that the multiple attempts or trials of the same experiment are dependent.

For simplicity, we consider an experiment with two outcomes only. Let’s call those $A$ and $A’$. When the experiment is performed the first time, we can have two possible outcomes, as shown in the tree diagram below. Therefore, we label the branches of the tree diagram with the probabilities of the events $A1$ and $A’1$, where $1$ denotes that the first attempt.

Now we perform the same experiment again. If the outcome of the first attempt was $A$, then we get a tree diagram as shown below. Note that, in this case, we are drawing the branches of the tree diagram for the case when the first outcome is known to be $A$. Hence the branches are labeled with probabilities $P(A2|A1)$ and $P(A’2|A1)$. 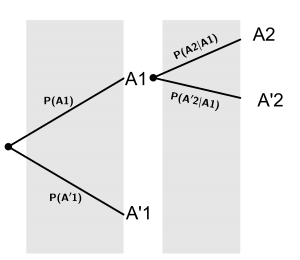 Similarly, we draw the branches when the first attempt was $A’$, as shown below. 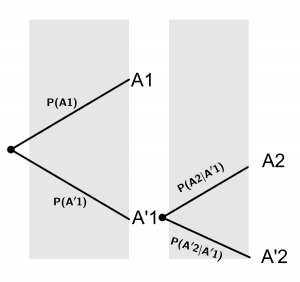 The overall tree diagram is as follows. 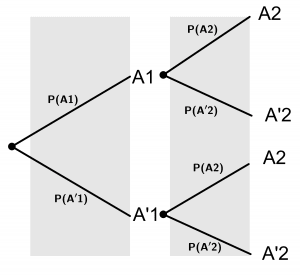 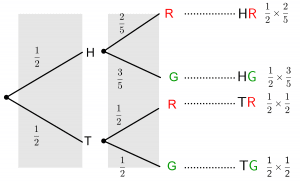 Sampling Without Replacement and Dependent Events:

In sampling experiments, we collect $n$ objects, and we sample from the collection $k$ times. There are two possible ways of sampling

Example 5:
We sample two cards from a deck of 52 cards without replacement. What is the probability that the first card is a King and the second card is a Queen.

There are $4$ Queens in a deck. If we have already drawn a king in the first attempt, so we are left with $51$ cards. Hence, drawing a Queen in the second attempt given that the first attempt was as King is given as
$P(\textrm{Second card is a Queen}) | \textrm{First Card is a King}) = \frac{4}{51}$.

Using the formulae described above, we can write

3.A box contains $100$ items. There are $4$ items that are defective. We sample two items from the box without replacement. Draw a tree diagram and find the probability of at most one defective item.

4.We sample two cards from a deck of $52$ cards without replacement. What is the probability that
a) Both are Kings
b) We get at least one King 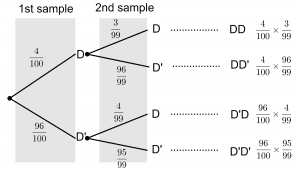