So, we all know that a triangle is a 3-sided figure with three interior angles. But there exist other angles outside the triangle, which we call exterior angles.

We know that the sum of all three interior angles is always equal to 180 degrees in a triangle.

In this article, we will learn about:

What is the Exterior Angle of a Triangle?

In other words, the sum of each interior angle and its adjacent exterior angle is equal to 180 degrees (straight line).

For example, in triangle ABC above;

But, according to triangle angle sum theorem,

How to Find the Exterior Angles of a Triangle?

Let’s take a look at a few example problems.

Substitute the value of x into the three equations.

Calculate values of x and y in the following triangle.

It is clear from the figure that y is an interior angle and x is an exterior angle.

subtract 140° from both sides.

Subtract 120° from both sides.

Divide both sides by to get,

Therefore, the value of x is 5 degrees.

Verify the answer by substitution.

Determine the value of x and y in the figure below. 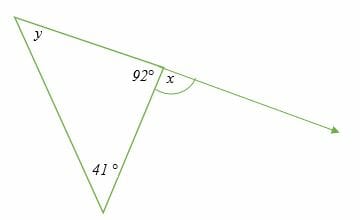 subtract 133° from both sides.