We can parametrize lines and line segments to understand the initial and ending positions of objects that we are observing. Learning about the steps of parametrizing a line can help describe the motion of an object or the behavior of the object given the third parameter.

We can parametrize a line by rewriting the values of $\boldsymbol{x}$ and $\boldsymbol{y}$ in terms of a third parameter but still satisfy the original equation.

This topic will be most helpful when you’ve already been introduced to the idea behind parametric equations and, of course, the equation of a line.

In this article, we’ll focus on rewriting equations of lines in parametric forms, learn how to graph lines from parametric equations, and explore problems that involve parametrizing linear equations.

How to parametrize a line?

It’s important to remember that any function can be expressed as a parametric curve. Let’s say we have $y = f(x)$, we can find a way to express $x$ and $y$ in terms of another parameter, $t$.

When parametrizing linear equations, we can begin by letting $x = f(t)$ and rewrite $y$ wit h this parametrization: $y = g(t)$. Remember that the standard form of a linear equation is $y = mx + b$, so if we parametrize $x$ to be equal to $t$, we’ll have the following resulting parametric forms:

This set of equations looks just like the original forms, so why do we need to parametrize the equations? That’s because there are instance where we want to find the position, $(x, y)$, of the data or object we’re observing at a given value of $t$.

Let’s say the equation $y = -3x + 5$ models the vertical position of an object given its horizontal position. If we want to know the object’s vertical and horizontal coordinates at the time, $t$, parametric, this equation will come in handy. 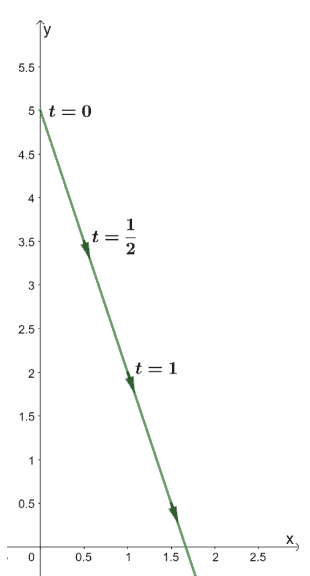 Here’s the actual graph of the parametric equations, $\left\{\begin{matrix}x=t\phantom{xxxxx}\\ y= -3t + 5\end{matrix}\right.$, so as you can see, by parametrizing the rectangular equation, we have a better understanding of the object’s positions at different values of $t$.

The graph of these parametric equations will be much steeper and will be progressing faster.

When two points are given to represent the parametric line, make sure to change the rate of change between the two coordinates of $x$ and $y$. We can then express the parametric equations in terms of $x(t) = m_1t + b_1$ and $y(t) = m_2t + b_2$.

Graphing parametric equations of a line

For example, if we want to graph the parametric equations, $\left\{\begin{matrix}x=t\phantom{xxxxx}\\ y= \dfrac{1}{2}t + 2\end{matrix}\right.$, we can begin by assigning key values for $t$.  (First step was skipped since $y$ is already in point-slope form) 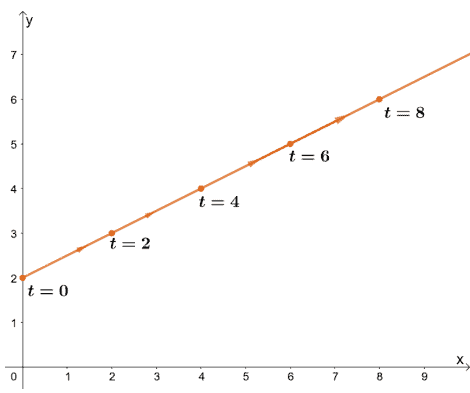 The parametric equations graph shows the direction and tells us how the graph progresses as the value of $t$ increases.

We can apply a similar process when parametrizing equations with a given interval for $t$. Make sure to keep in mind if the direction of the segment is given.

These are all the general concepts that you need to learn when parametrizing a line. In the next section, we’ll explore more examples to help you master this topic.

Parametrize the equation the following equations:

When parametrizing a linear equation, we begin by assuming $x = t$, then use this parametrization to express $y$ in terms of $t$.

For the second item, let’s divide both sides of the equation by $2$ first.

Once we have the simplified equation, we can now substitute $x = t$ to parametrize the linear equation.

Now that the equation is in its point-slope form, we can now substitute $x = t$.

Parametrize the equation, $y = 2x + 1$, in terms of $-2 \leq t\leq 2$. Graph the resulting line segment if the segment’s direction is moving from right to left.

The equation, $y = 2x + 1$, is already in point-slope form, so we can go ahead and substitute $x = t$ to parametrize the equation. 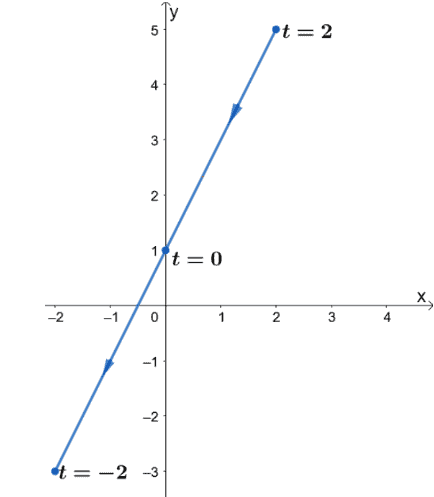 This graph shows how the direction may vary depending on what’s given. Be careful with problems like and double-check if you’re asked to graph a parametric line from left to right or right to left.

An object travels at a constant rate along a straight path from $(-8, 2)$ to $(4,-4)$ in six seconds. The coordinates are measured in meters. Find parametric equations that represent the position of the object.

This problem is an application of parametrizing linear equations. However, this time, we can see that the object moves from $(-8, 2)$ to $(4,-4)$ in just six seconds.

This means that the parametrized equations representing the position of the object are $\left\{\begin{matrix}x=-2t -8\\ y= t + 2\phantom{xxx}\end{matrix}\right.$.

This shows that there are instances where both $x(t)$ and $y(t)$ will be in point-slope forms, so be careful in assuming right away that $x = t$ is the parametrized equation for $x$. 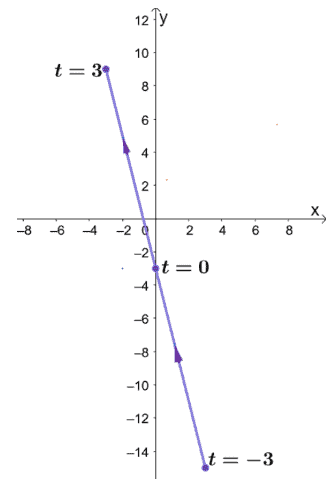