A reference angle is an acute angle between a given angle’s terminal ray and the x-axis.

Reference angles are useful in trigonometry and sciences that make use of it, such as astronomy, architecture, and engineering.

Before moving forward with this section, make sure to review angles and trigonometric functions

What is a Reference Angle?

A reference angle is a positive acute angle or right angle. Each angle has a reference, which can be found by locating an acute angle formed by the terminal angle of the given angle and the x-axis.

This means that an acute angle or a right angle is its own reference angle.

Now, the reference angle for an obtuse angle is easy to visualize using the unit circle. This is the angle formed by the terminal side of the obtuse angle and the ray extending to the left along the horizontal axis.

To find this angle algebraically, subtract the given angle from $180$ degrees or $\pi$ radians. Remember that this angle is always given as a positive angle. 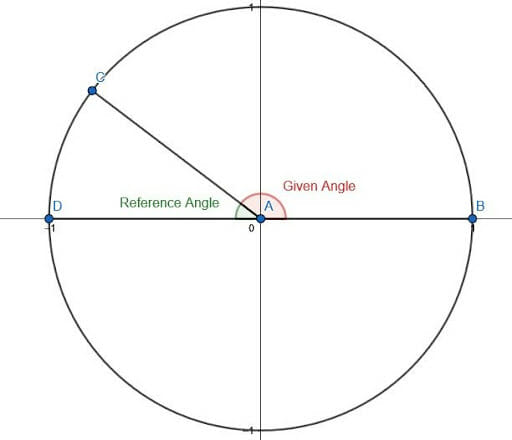 Recall that reflex angles are angles greater than $180$ degrees but less than $360$ degrees.

Angles Greater than a Full Angle

For angles greater than a full angle or for negative angles, find the coterminal standard angle between $0$ and $360$ degrees or $0$ and $2\pi$ radians. Then, find the reference angle for this standard angle.

How to Find the Reference Angle

Based on this, the formula for finding the reference angle, $\gamma$ degrees, for a given angle of $\alpha$ degrees varies depending on the value of $\alpha$.

When $\gamma$ and $\alpha$ are in radians, these formulae are:

Note that memorizing the trigonometric ratios for every single angle is a lot! Using trigonometric identities and reference angles, however, means one can memorize at least the major ratios between the $0$ angle and a right angle and know many other ratios.

For example, suppose someone knew the sine and cosine ratios for just two angles measuring $45$ degrees and $30$ degrees. This person also knows the sum and difference identities, namely that:

This opens up a lot of possibilities with very little memorization.

This section goes over common examples of problems involving reference angles and their step-by-step examples.

Recall the formulas for sine and cosine:

Then, simplifying, this is:

Now, this simplifies to:

Finally, this simplifies to:

Given this information, find cosine of $75$ degrees.

Note that cosine and sine of $45$ degrees were given in example 1. Therefore, cosine of $75$ degrees is equal to:

As one fraction, this is:

This problem builds off of the previous two.

Since this is the cosine of the difference of angles, the minus sign on the right side of the equation becomes a plus sign.

Find the cosecant of an angle with a measure of $120$ degrees.

Recall first that cosecant is equal to $\frac{1}{sinx}$.

This then simplifies to:

Therefore, the sine is:

Thus, this means the cosecant is the reciprocal,