Union of Sets – Definition and Examples

We looked at sets before, and they can be defined as the collection of distinct and unique elements. These elements can be numbers, alphabets, addresses of city halls, locations of stars in the sky, or numbers of electrons in a certain atom.

Our operation of interest today is the union of sets. This operation is not only unique to set theory. It is a widely used mathematical concept analogous to addition. The concept is common to Euclidean geometry and set theory.

Before moving on to discuss the union of sets in detail, let us first define it briefly:

‘Union of any two sets A and B is defined as a new set containing elements present in both sets A and B’.

What is the Union of sets?

Whenever the term union of two sets comes up, it means a resultant new set containing all the elements present in both sets. Alternatively, we can also say that it contains all elements present in the first set, the second set, or both of these sets.

The word ‘or’ is used to represent the union of two sets. For example, what is the probability that light is a wave or a particle?

Now let us assume we have two sets A and B; their union results in a new set containing all the elements present in A or B or both. The union of two sets has several properties, which we will discuss later, but you must understand that union is a commutative and associative operation for now. What these properties are, we leave for later.

Consider the following example to understand the concept of union.

You are given two sets defined as:

Find out elements present in the union of A and B.

In the union of two sets, we will include elements present in A, in B, or both. So these elements are a, b, g, j, k, h, t. You will observe that g and k were present in both sets, but we will only mention them once as they are common to both A and B.

The notation used for Union:

Going deeper into a union of sets, our next step is to talk about the mathematical notation used for representing the union of sets. The union between two sets A and B is represented using the operator ‘U’. This operator is used between operands, which are the names denoting the sets in this case.

We can take the union of as many sets as we like simultaneously. For example, we can take A U B U C U D where the resultant set would all the A, B, C, and D.

Let’s do an example of this.

You have two sets defined as:

Perform union of the sets.

Union of sets is denoted by ‘U’. We are already aware of the definition of the union of sets, so:

Venn diagram is a handy tool for visualizing sets and the operations performed between them. They are also the most appropriate tool to understand the operations on sets to apply them to real-world applications.

However, we can only use them to represent finite sets. The region covered under a certain curve represents a set, whereas the elements of that particular set are represented using points inside the diagram’s region.

Let us move on to how we can draw a Venn diagram for the union of sets. We will first assume a universal set, of which set A and B are subsets. The following Venn diagram represents the union between these sets. 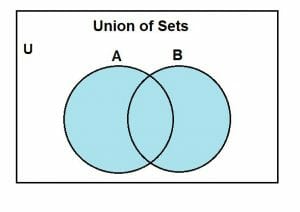 The blue colored region shows the union of sets A and B. We can see that the union includes all the elements of these sets. Although we use two sets here, one thing to keep in mind is that we can use the Venn diagrams to represent the operation between multiple sets, given that they are finite.

Let’s do an example to construct our own Venn diagram:

Draw a Venn diagram to represent the union between the two sets:

We will divide our solution into a series of steps. Our first step is to find out the union of these sets, which comes out to be:

These are all the elements of A and B. Let us move on to the Venn diagram now.

Our next step is to draw two circles representing the two sets. We know some elements are common to A and B, so we keep some overlapping regions. 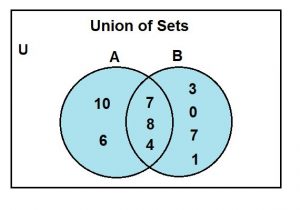 Properties of Union of sets:

In this section, we will be discussing some properties of the union of sets. In set theory, almost all set operations have properties that are different for each of them.

The commutative property of the union states that:

‘The result will not be affected by the order of the operating sets.’

This means that if you change the position of the operands, the solution will not be affected. Mathematically, we can say that:

Let’s solve an example regarding this.

Given that the sets A and B are:

Prove that the commutative property of union holds for them.

Our first step is to solve for the left-hand side of the equation, which is:

Next, we solve for the right-hand side of the equation, which is:

From the above right and left sides of the equation, we can prove that the commutative property holds for the union as both sides are equal.

The associativity property of union states that:

‘The grouping of sets for a union using parentheses will not affect the result.’

This means that changing parentheses’ position in any expression of sets involving union will not affect the results in any way whatsoever. Mathematically it is written as:

Let’s solve an example regarding this.

Prove that the associativity property of union holds for the following sets:

Solving first for the left side of the equation:

Now, solving for the right side of the equation:

From the left and right sides of the equations, we can prove that the associativity property holds for the sets A, B, and C.

This property states that the union of any set with itself will give back the set itself, mathematically we can write this as:

The property of null set states that the union of any set with a null set will result in the set itself. Mathematically, we have: