The unit circle is a circle in the Cartesian plane centered at the origin and with a radius of $1$.

This circle is useful for analyzing angles and trigonometric ratios. Typically, the initial angle is the line segment extending from the origin to the point $(1, 0)$. Then, the orientation in the plane helps determine positive and negative values for trig functions.

While the unit circle is fundamental to trigonometry, it is also important in all branches of science, mathematics, and engineering that use trigonometry.

Before we move on with the information of this section, make sure to review trigonometric ratios and angles.

What Is a Unit Circle?

A unit circle is a circle that has a radius of one unit and lies in the Cartesian coordinate plane with a center at the origin, $(0, 0)$. The unit circle is incredibly important in trigonometry because it is easy to create angles using the radii of this circle.

These angles are easily denoted by the point at which their terminal angle intersects the circumference of the circle. Then, it is simple to create a right triangle using these radii. A vertical line segment connecting the intersection of the terminal radius and the circumference to the x-axis creates such a triangle.

In this triangle, the hypotenuse is a radius of the circle, so it has a length of $1$. The sine and cosine then are just the lengths of the vertical segment and the horizontal segment, respectively. This physical representation makes calculations easy and allows the viewer to visualize angles that do not make sense when only considering the triangle itself, such as obtuse angles and reflex angles.

Equation of the Unit Circle

A unit circle has this equation:

This looks very similar to the trigonometric identity:

When analyzing angles in a unit circle, the initial angle is always the radius extending from the origin to the point $(1, 0)$. This is a horizontal line extending to the right of the center.

The terminal ray will be another radius of the circle. Then, the coordinates $(x, y)$ of the point where this radius intersects the circumference will be the cosine and sine of the angle, respectively.

These two trig functions set the basis for the other four, which build off of sine and cosine.

This section covers common examples of problems involving the unit circle and their step-by-step solutions.

What is the tangent of the angle $BAC$?

It might help to draw a picture of this situation. 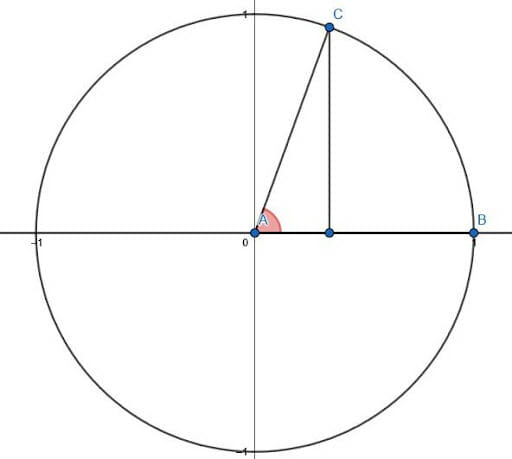 Here, the angle $BAC$ is the central angle, and AB and AC are both radii of the unit circle.

That is, knowing the measure of the angle is not necessary in order to determine the angle’s sine and cosine in the unit circle.

Recall that the quadrants in the Cartesian plane are separated by the x and y axes. The first quadrant is the one to the upper right, the second is to the upper left, the third to the lower left, and the fourth to the lower right.

That is, points in the first quadrant have both positive $x$ and $y$ values. In the second quadrant, points have a negative $x$ value and a positive $y$ value. In the third, both are negative, and in the fourth, only the $y$ values are negative.

Since the unit circle has its center at the origin, it has points in all four quadrants. Any angles formed with radii that intersect the circle in the first quadrant will have positive sine and cosine because the intersection has positive coordinates.

Similarly, since both coordinates are negative in the third quadrant, angles whose terminal ray intersects the unit circle in this quadrant have negative sine and cosine. Finally, in the fourth quadrant, x values and cosine are positive, but y values and sine are negative.

Since the first quadrant includes angles between $0$ and $90$ degrees or $0$ and $\frac{\pi}{2}$ radians, this means sine and cosine are both positive in this range.

Similarly, the second quadrant includes angles from $90$ degrees to $180$ degrees or $\frac{\pi}{2}$ to $\pi$ radians. This means that sine is negative and cosine is positive for angles in this range.

The third quadrant includes angles between $180$ and $270$ degrees or $\pi$ and $\frac{3\pi}{2}$ radians. These will consequently have negative sine and cosine values.

An angle has a sine value of $\frac{2}{2\sqrt3}$. What is its corresponding cosine value?

Therefore, in this case, the tangent is equal to the $y$ value divided by the $x$ value. Note that this is equal to the slope of the radius which has a point at the origin and this point, $(x, y)$.

What is the relationship between the sine and cosine of an angle $\theta_1$ and an angle coterminal to it, $\theta_2$?

Therefore, coterminal angles will have the same sine and cosine ratios.