Bhaskaracharya is just one of the many historical figures that you’ll rarely hear about, unless you happen to be from his home country of India. Also known as Bhaskara II, or Bhaskara the Teacher, Bhaskaracharya formulated what would go on to become the foundations of the mathematics that we use today.

While he came to the wrong conclusions often, Bhaskara’s work served to set the stage for those who would later come along and repurpose his work within their correct frames of reference. Much of his work still continues to be used as-is, without modification, because of how well-thought-out it was. In fact, today, most people still use Bhaskara’s work without even realizing it!

Who was Bhaskara II?

Labeled as one the “greatest mathematicians of medieval India”, the 12th-Century mathematician Bhaskara II wrote many books containing mathematical and astronomical feats which would not be discovered elsewhere for another 500 years.

While very intelligent in his own right, Bhaskara did not develop mathematics himself. He had access to the writing of the Ancient Greek scholars, as well as that of the many Indian mathematicians who had come before him, especially Bhaskara I, a famous Indian mathematician from the 7th Century.

It was Bhaskara I’s influence that inspired Bhaskara II to join Ujjain, India’s “most prestigious mathematical center” at the time. It was at Ujjain where Bhaskara II would formulate the ideas which would go on to become his legacy.

However, he is not well known outside of India. Sure, Bhaskaracharya received high acclaim at home, but he never received much acknowledgment in Europe or the Middle East. Over the years, most of his work went uncredited, or was otherwise given to others.

Bhaskara developed solutions and foundations for what would eventually become calculus, as well as the second proof of the Pythagorean Theorem – yet, no one talks about him outside of his home country.

Still, Bhaskara II’s legacy lives on through other Ujjain mathematicians, and through his son, who established a school dedicated to teaching his work.

While we may know his work, the man behind it is a mystery. Most of what we now know about Bhaskara comes from his son and the records kept by the Ujjain, where Bhaskara served as head of the astronomical observatory.

From these records, we know that Bhaskara was born in 1114 A.D., near Bijjada Bida (present-day Bijapur), but not much else, especially about his early life. We do know that he was the son of an equally-famous Indian mathematician and astrologer, Mahesvara. Today, many experts agree that it was Mahesvara who taught Bhaskara everything he knew and developed throughout the course of his life.

While at Ujjain, he wrote most of his books. Writing in verse (as was Indian custom at the time), Bhaskara wrote on several topics of mathematics and astronomy, such as trigonometry, algebra, and calculus.

While he published many books, Bhaskara is mostly remembered for his 1150 A. D. masterpiece, the Siddhanta Siromani (Crown of Treatises). Released as a 4-part series rather than as a single book, Bhaskara wrote the 1450-verse tome when he was 36 years old.

Each part of the book focused on a separate field of astronomy and mathematics. Often referred to as separate books themselves, these parts were called the Lilavati, Bijaganita, Grahagaṇita, and Goladhyaya.

Named after his daughter Lilavati, Bhaskara wrote his first Siddhanta Siromani volume as condolence for her husband’s death, because of a contraption he had made to ensure that the marriage happened at a certain time had failed.

The Lilavati contains thirteen chapters on several mathematical topics, including mensuration and trigonometry, although it mostly worked to define terms and the properties of the number zero. Because the book was a textbook, Bhaskara included several problems for readers to work through.

At its heart, the book is mostly about indeterminate equations and obtaining integer solutions for them. Bhaskara delved into several ways to solve the equations, from multiplication to squaring. He even discussed the Rule of Three, something that Europe would not discover for themselves for another 500 years.

Some of the other important subjects were:

The 12-chapter Bjiganita is all about algebra, including the first written record of the positive and negative square roots of numbers. The book also continued Bhaskara’s work on indeterminant equations and solutions to unknown quantities. 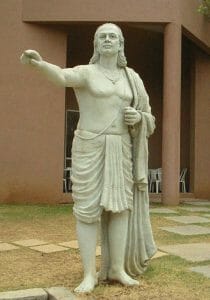 Expanding upon previous works by Aryabhata and Brahmagupta, Bhaskara used several pages of the Bjiaganita to improve the Kuttaka methods for solving equations, including both indeterminant and Diophantine varieties.

The book also furthered Bhaskara’s work on the Number Zero, leading to one of his few failures. The book details his conclusions that dividing by zero would produce infinity. And while there are certainly situations in which this works, it is a flawed solution that would serve to break mathematics in the long run, if true.  It would take European mathematicians to eventually come along and realize this, and then declare that dividing by zero was impossible.

Still, it bears saying that the Bjiaganita contains many other conclusions that panned out successfully, including the chakravala method solutions to Pell’s equation.

Some of the other topics in the book include quadratic and simple equations, along with methods for determining surds.

The third book deals with mathematical astronomy. Derived from concepts first envisioned by Aryabhata, Bhaskara uses his third publication to describe the heliocentric view of the solar system and the elliptical orbits of planets, based on Brahmagupta’s law of gravity.

Throughout the twelve chapters, Bhaskara discusses such topics as the mean and true longitudes and latitudes of the planets, as well as the nature of lunar and solar eclipses. He also examines planetary conjunctions, the orbits of the sun and moon, as well as issues arising from diurnal rotations.

He also wrote estimates for values such as the length of the year, which was so accurate that we were only off their actual value by a minute!

Bhaskara’s final, thirteen-chapter publication is all about spheres and similar shapes, such as armillary spheres, rings, and hoops. Most of the book deals with spherical trigonometry, in which Bhaskara found the sine of many angles, from 18 to 36 degrees. The book even includes a sine table, along with the many relationships between trigonometric functions.

Other topics in the Goladhyaya include:

Bhaskara also discussed an epicycle model for planetary orbits. This model proposed that some planets, such as the sun and moon, move in small circles as they move in their orbits. While the model does not line up with reality, Bhaskara notes how difficult it is to calculate astronomical phenomena using the astronomical instruments that were available at the time.

Throughout the entire Siddhanta Siromani series, Bhaskara reached many mathematical achievements that rivaled the works of both Europe and China.

However, none of these would come close to the equation that now bears his name – despite most people having never heard of it, even though they know what it is and how to use it.

This is because most of the world simply refers to Bhaskara’s discovery as the quadratic formula for the solutions of quadratic equations:

Originally used just for real roots, others would later expand this solution to include complex number solutions as well, making the quadratic formula one of Bhaskara’s most important discoveries.

Along with the quadratic formula, Bhaskara also created other insights into quadratic equations.

For instance, he also gave us the formula for finding the square root of a sum of a number and a square root:

Other Achievements in Mathematics and Astronomy

While the quadratic formula was big, it was not Bhaskara’s only achievement that he wrote about in his treatises.

Bhaskara developed many of the trigonometric identities and formulas used throughout mathematics, navigation, geodesy, and astronomy.

For instance, the Goladhyaya is the first publication to report the now-famous formulas:

Aside from that, Bhaskara also made advancements in other areas of math and astronomy, including (but not limited to) his work on what would become Rolle’s Theorem.

In particular, Bhaskara noted that the distance between a planet’s real and predicated locations become zero when the planet is at its farthest, or nearest, points to Earth. This solution to what was the center equation hinted towards the general mean value theorem which would replace it.

Bhaskara’s other major contributions are the foundations of what would later become calculus. In particular, he also dabbled in differential calculus, integral calculus, and mathematical analysis – even though he never fully recognized their usefulness. He just developed the principles to solve problems in astronomy.

While Isaac Newton and Gottfried Leibniz would later serve to bring everything together, Bhaskara was the one who formulated the foundations long before they were born. He even coined the concepts of the derivative and differential coefficients.

While the man himself is not well-known outside of India, Bhaskara’s work traveled the globe. Other Indian mathematicians picked up his work immediately upon his death, with the establishing of his school. Outside of India, his work got compiled into the works of Islamic scholars, only to be reassigned back to him recently.

Still, Bhaskara’s influence on mathematics cannot be denied or understated.

In fact, there is strong evidence that Islamic mathematicians knew about Bhaskara and his ideas as he published them. Many reported Islamic mathematic discoveries to show direct influence, starting from the end of the 12th Century, ultimately culminating in a famous 1587 Persian translation of the Lilavati.

In Europe, Bhaskara’s influence came through those Islamic channels. While no one in Europe would know his name until the 20th Century, European scholars were using Bhaskara’s work all throughout the Renaissance.

Some scholars do debate whether Bhaskara II was influenced by Diophantine, although these claims were later disputed, as similar Indian developments on Diophantine equations going as far back as the Sulba Sutras were written from 800 to 500 BCE.

Nevertheless, Bhaskara II’s work will continue to inspire other Indians to take up mathematics for centuries to come.