The factors of 87 are integers by which 87 is evenly divided. The remainder is also zero. When we multiply the divisor by the quotient, the product always equals the actual number.

Factors are generally categorized as:

Factors can only be written in whole number form. Numbers in decimal or fractional format are not considered as the factors of a number.

There are two ways to find factors of a given number:

In this article, we will look at factors of 87, how to find them, the factor tree, factor pairs, examples, and a lot more, so get ready to dive into the ocean of factors!

What Are the Factors of 87?

There are a total of eight factors of 87. Four are positive factors, and the remaining four are negative ones.

How To Calculate the Factors of 87?

You can calculate the factors of 87 by using various methods, and the two most common methods are the division and multiplication methods. We will discover both methods in this article.

As we already know, 87 has more than two factors as it is a composite number.

Factors of 87 by division method:

Simple rules of division are followed. Any number that fulfills the requirements of being a factor is known as a factor of that specific number.

Start the division with the smallest number.

The number one is a factor of every integer because every number is completely divisible by 1.

Looking at the above division, we conclude that 1 and -1 are factors of 87.

The quotient is in decimal form, which means 2 is not a factor of 87.

When we divide 87 by 3, the number is evenly divided, and no remainder is left after division. Condition of factors is satisfied 3 and -3 are the factors of 87.

Again. the remainder is a non-zero number, so 5 is not a factor of 87.

When 87 is divided by itself. Condition of factors is satisfied.

Every integer is a factor in itself. Every number divides itself evenly, and the remainder is always zero. 87 and -87 are the factors of 87.

Factors of 87 by multiplication method:

In this method, laws of multiplication are implemented.

When we multiply the divisor by the quotient of the above divisions. The product is equal to the original number.

The product of two negative signs is always a positive whole number.

By the above multiplications, we can easily extract the factors list of 87.

If we compare the factors lists of both methods, we conclude that the factors will be the same. Whatever way you apply the basic concept should be clear.

Factors of 87 by Prime Factorization

The two most common methods of discovering prime factorizations are:

Keep in mind that number one is not prime.

29 is the quotient. It is not again divisible by 3. Now divide it by the next prime factor. The next smallest prime factor is 29.

The quotient is 1, so this division terminates here.

The Prime Factorization of 87 is shown below in figure 1:

The prime factorization of 87 can be written as:

The factor tree is a pictorial representation of factors of any integer.

Now we will learn how to construct a factor tree:

Write the number 87 at the top. Extend two branches out of it and fill them with the prime factors of 87 that divides it evenly.

The factor tree of 87 is shown below in figure 2: 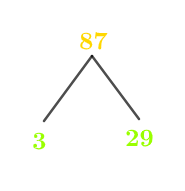 Factors of 87 in Pairs

Factor pairs are sets of numbers that, when multiplied, give the original number as a product.

The factor pairs can be both positive and negative, but they can’t be in fractional or decimal form.

The positive factor pairs of 87 are the following:

Now finding the negative factors of 87:

The negative factor pairs of 87 are the following:

For further enhancement of the concept, let’s solve some examples regarding factors of 87.

Help Zoe to find the average of aspects of 87.

Firstly, find the factors of number 87:

The average can be calculated by adding up all factors of 87 and dividing it by the total number of factors.

Calculating the sum of all factors of 87:

Now divide the sum by the total number.

Finding the sum of all prime factors of 87

87 is an odd number, and all its factors are odd.

Finding the sum of all odd factors of 87

Oliver wants to distribute 87 candies among 29 students. How much will each student get?

Each student will get three candies.