Division, one of the more challenging operations, is involved in fractions. Since Decimal values are simpler to understand, we convert fractions to decimal values to make them more useful in mathematical questions.

Now, we introduce the method used to solve said fraction to decimal conversion, called Long Division, which we will discuss in detail moving forward. So, let’s go through the Solution of fraction 87/100. 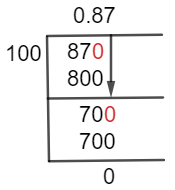 We start solving a problem using the Long Division Method by first taking apart the division’s components and comparing them. As we have 87 and 100, we can see how 87 is Smaller than 100, and to solve this division, we require that 87 be Bigger than 100.

Now, we begin solving for our dividend 87, which after getting multiplied by 10 becomes 870.

Finally, we have a Quotient generated after combining the two pieces of it as 0.87 = z, with a Remainder equal to 0.