A linear graph is a representation of a linear relationship in the Cartesian coordinate system.

Essentially, a linear graph is a straight line plotted on the $xy$ coordinate plane.

While linear graphs are an important geometric concept, they also play an important role in algebra and even calculus, which is concerned with finding tangent lines. Since many scientific relationships are linear, linear graphs can be used to convey important information and make predictions.

What is a Linear Graph?

A linear graph is a representation of a linear relationship on the coordinate plane.

Linear equations express the linear relationship between two variables $x$ and $y$. Since each linear equation has a unique linear graph, either can be determined from the other.

There are three common ways to write a linear equation. These are slope-intercept, point-slope, and standard form.

Many well-known relationships have a corresponding linear graph. These include pressure and depth, quantity and price, volume and mass, and many more.

Recall that density is the relationship between volume and mass, is a linear relationship. For example, the density of water is $997$ kg/m$^3$. This means that for every additional meter cubed of water in a container, the mass increases by $997$ kg.

Since no water has no mass, the $y$-intercept is $0$. Therefore, the slope-intercept equation for the density of water is $y=997x$.

A linear graph is a representation of the linear relationship in the xy-coordinate plane. This will take the form of a straight line, which can be uniquely determined by two points or by one point and a slope.

How to Plot a Linear Graph

This section goes over common examples of problems involving linear graphs and their step-by-step solutions.

Find slope-intercept form of the given graph. 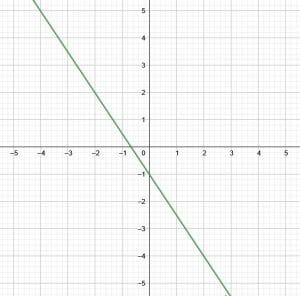 Find standard form from the given graph. 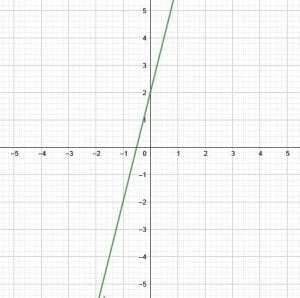 This means that the $x$ and $y$ intercepts are a good place to start. In this case, both of these values are visible in the given graph.

These numbers meet all of the requirements. Therefore, the equation in standard form 4x-y=-2.

Use these two points to make a graph and then find the equation for the line in slope intercept form and in standard form.

Now, draw a line connecting these two points. This is the linear graph because two points uniquely identify it. 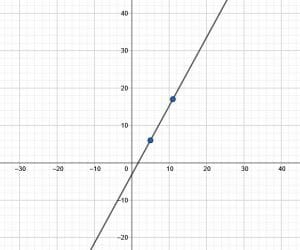 Next, use this information to find the equations for the line.

Now, there are a couple ways to convert this equation into standard form. Note that it is possible to use the intercept method from Example 2, but it is also possible to get $x$ and $y$ on one side of the equation and everything else on the other side. This is the method used here.

Then, use multiplication to make $A, B,$ and $C$ co-prime numbers and $A$ positive.

Now, multiply by $6$ to get rid of the denominators:

Since there are no common factors for these three numbers, this is the standard equation of the linear graph.

A line with a slope of $-\frac{5}{2}$ passes through the point $(9, -4)$. Make a linear graph corresponding to this line and find the equation for the line in slope-intercept and standard forms.

To graph this function using only the information given, find the point $(9, -4)$ on the graph. This is the point that is $9$ units to the right of the origin and $4$ units below it.

Now, since there are two points, connect the two points with a line and extend it beyond the two points in each direction. Include arrows to show that the line goes to infinity. This is the linear graph of the line. 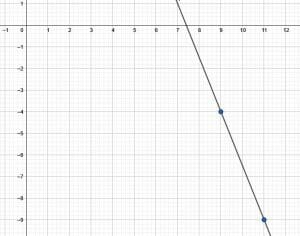 Next, find the two equations. Since neither intercept is easily visible, use the point-slope formula to derive the other two.

Now, point-slope using the original, given point is:

This is slope intercept form. To convert this to standard form, move both of the variable terms to the left side. This is:

Since all of the terms must be whole numbers, multiply each side by $2$. This yields:

The slope-intercept form of equation for a linear equation is $y=\frac{4}{3}x-1$.

First create the linear graph for this line, and then find the standard form of the equation from the given slope-intercept form.

Recall that the slope-intercept form of the equation gives one point, namely the $y$-intercept and the slope, which can be used to find a second point.

To create the linear graph, first connect these two points, extend the line segment in both directions, and draw arrows on the end to show that it extends to infinity. 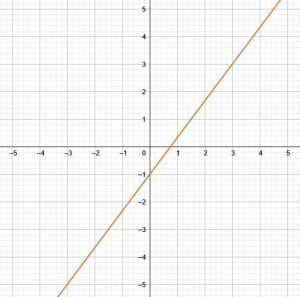 Since $A$ must be a positive whole number, multiply each side by $-3$ to get: