Measures of central tendency, especially the mean, median, and mode, are ways to describe the center of a set of data.

The different measures work better in different types of data sets, but the most complete picture includes all three.

Measures of central tendency are important for probability, statistics, and all areas of science and research.

Before moving forward with this section, make sure to review arithmetic mean.

What are the Measures of Central Tendency?

Measures of central tendency are ways to describe what a typical data point is in a set of data.

Note that the measure of central tendency is only one value among many summary statistics (descriptive numbers) for a set of data. Data sets can have the same mean, for example, but be very different.

It is also important to note that measures of central tendency have the most meaning when dealing with quantitative data or qualitative data that has been coded quantitatively.

The mean of a data set is the average.

Typically, when people think of the average, they mean the sum of all the terms in the data set divided by the number of terms. This value is the arithmetic mean.

Another type of mean is the geometric mean. This is equal to the nth root of the product of all the terms in a data set. Arithmetically, this is:

To understand the geometric root consider the case of a set of two data consisting of only two points, $a$ and $b$. Now, imagine a rectangle where one side is length $a$ and the other is length $b$. Finally, imagine a square that has the same area as this rectangle. The geometric mean is the side length of such a square.

This same concept holds true for higher dimensions, though it is difficult to visualize beyond the third dimension.

The median is the middle point in a set of data found by ordering the data from least to greatest and finding the middle term.

If there is an odd number of terms, this is easy to do. There will be a number exactly in the middle.

If, however, there are an even number of terms, then there will be two middle numbers. The median of such a data set will be the arithmetic average of these two numbers. That is, the median is the sum of the two numbers divided by two.

While the arithmetic mean can be easily affected by outliers, the median is unaffected by upper or lower outliers in a data set.

The mode is the term that appears most frequently in a set of data. It is the only measure of central tendency that is applied easily to uncoded qualitative data.

Often, especially in politics, a candidate will be said to have a “plurality” of votes. This means that the candidate got the most votes. That is, if the data set is the votes, the mode is the candidate who got the plurality.

Note that there can be more than one mode in a set of data if multiple terms are tied for appearing the most times.

Measures of central tendency give a fuller picture f a data set when they are combined with other summary statistics such as variability.

This section covers common examples of problems involving measures of central tendency and their step-by-step solutions.

In this case, the median and the mean are quite different. It could be that the data just deals with a really wide range of values. More likely, however, the mean has been skewed by an upper outlier. That is, an atypically large number has affected the mean more than the median.

This means that the data is likely skewed strongly to the right and that the median is a better indicator of central tendency than the mean.

A random sample of customers at a car insurance company answer a question about the color of their car. The results were:

What is the color of a typical customer’s car?

Since this is qualitative data, the mode is the measure of central tendency that makes the most sense.

For this data set, there is 1 yellow car, one green car, two white cars, two black cars, two gray cars, four red cars, and five blue cars. The mode is therefore blue cars, so it makes sense to say the typical customer has a blue car.

There might also be a way to find a “median” or a “mean” for this data set by putting the colors in order based on where they fall in the visible light spectrum and assigning them a number accordingly. Such codes already exist, for example, in computer color codes. This might be confusing for cars, however, because there are multiple shades of blue (aqua to navy).

Find the mean, median, and mode for the following data set:

Before finding any of these values, it helps to count the number of terms in the data set and put them in order from least to greatest. In this case, there are $16$ data points. In order, they are:

The easiest measure of central tendency to find is the mode, since it is just the number that appears the most often. In this case, the number $1$ appears $5$ times which is more than any other number.

Next, find the median. Since there are an even number of terms, there are two middle values, $2$ and $3$. The average of these two numbers is $2.5$, which is therefore the median. It’s okay that this number doesn’t appear in the data set. It doesn’t have to, just as the mean doesn’t have to.

Finally, find the mean by first adding together all of the values.

Note that the mean and median are both higher than the mode but not too different from each other. 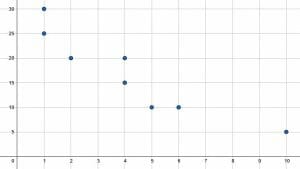 Find the mean, median, and mode for both the $x$ and $y$ values.

Since the mode is the easiest, it helps to start there. For the $x$ values, both $1$ and $4$ appear twice. Both of these values then are the mode.

Now to find the average of each set, add up all of the terms and then divide by the total number of terms. For the $x$ values, this is:

An economist records the price of different loaves of bread at a store. He gets the following $20$ values:

Based on the results, what is the cost of a typical loaf of bread at this store? Assume all prices are in dollars.

There are different ways to establish a typical value, all of which are measures of central tendency. In this case, it makes sense find the most common three, mode, median, and mean, to get a good idea of a typical price for a loaf of bread at this store.

First, order the data from least to greatest. This is:

Finally, to find the average, add up all of the terms and divide by $20$. It may help to use a calculator since there are so many terms, but it is not necessary.

Since the prices are in dollars, it makes sense to round to the nearest cent. Therefore, the mean is $4$ dollars even.