When we talk about real-world scenarios, percentage problems hold a crucial role. Imagine you want to know how many days have you been absent from work if you are handed over an attendance sheet that says “absent 10 percent from a total of 1000 days”. To figure out how many days you were absent or in other words present at work, you must now calculate 10% of 1000. From our earlier speculation, you were absent for 100 days from a total of 1000 days. Such problems can be useful in day to day exercises.

This was a straightforward answer, whereas an in-depth illustration is given below which will help you to understand how we calculate 10 percent of 1000.

The answer can be achieved by taking the fraction 10/100 and multiplying it by 1000. The final solution will come out to be 100 when you solve the equation.

Firstly, describe 10 percent of 1000 in terms of a mathematical phrase:

Use the above equation thus,

Next, simplifying the above equation gives: 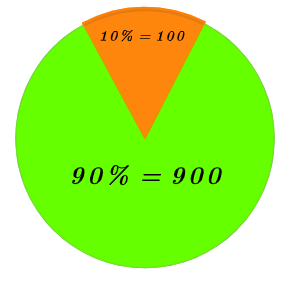