In Geometry, a triangle is the most important shape, defined as a closed two-dimensional diagram containing 3 sides, 3 angles, and 3 vertices. In simple words, a triangle is a polygon with 3 sides. The word triangle is taken from the Latin word ‘triangulus,’ which means three-cornered.

During ancient times, astronomers had created a method called triangulation to determine the distances of the distant stars. They measure the distance from two different locations, then measure the angle created by shift or parallax, formed by the observer’s movement between the two locations. Then they used to apply the law of sines for calculating the required distance.

The Egyptians created the pyramids around 2900 B.C. Its shape is actually that of a 3D pyramid, which has triangular faces. It is a perfectly engineered model that its lengths and angles on all sides are the same. Miletus (624 BC – 547 BC), a Greek mathematician, adopted Egypt’s geometry and was brought to Greece.

Aristarchus (310 BC – 250 BC), a Greek mathematician, used the above method to find the distance between the Earth and the Moon. Eratosthenes (276 BC – 195 BC), again, used the same method to determine the distance around the surface of Earth (called circumference).

This article will discuss the meaning of a triangle, the different types of triangles and their properties, and their real-life applications.

What is a Triangle?

A triangle is a two-dimensional closed figure with 3 sides. It is a polygon with three corners, three vertices, and three angles joined together that forms a closed diagram. We use the symbol ∆ to denote a triangle.

Figures A and B are triangles.

The types of triangles are classified based on:

Classification of triangles according to the measure of interior angles

According to the measure of interior angles, we can classify triangles into three categories:

An acute angle triangle is a triangle in which all three interior angles are less than 90 degrees.

Each one of the angles a, b and c is less than 90 degrees.

An obtuse triangle is a triangle in which one of the interior angles is more than 90 degrees.

Angle a is more obtuse, while angles b and c are acute. 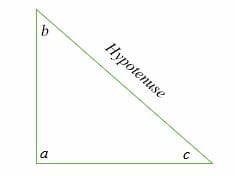 In the illustration above, angle a = 90 degrees while angles b and c are acute angles.

Classification of triangles according to the length of their sides

We can classify triangles into 3 types based on the lengths of their sides:

An isosceles triangle is a triangle in which two sides and two angles are equal. Equal lengths of a triangle are shown by making an arc on each side.

In the diagram above, the length of side AB = AC and ∠ ABC =∠ ACB. 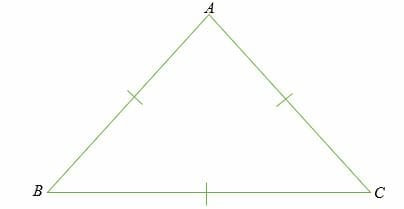 Note that the angles of an equilateral triangle do not depend on the lengths of the sides.

A scalene triangle is a triangle in which all the sides have different measures and all the interior angles are also different.

Here are a few basic properties of a triangle:

Find the value of angle x in the triangle below.

This is an isosceles triangle in which two sides are equal, and also two angles are equal. Therefore,

Find angle y in the right triangle shown below.

Classify the triangle shown below.

This is an isosceles triangle. Two sides are equal, and two angles are equal in measurement.

Let’s explore some of the real-life applications of triangles: