A 360 degree angle, or a full angle, is the interior angle measure of a circle.

$360$ degree angles play an important role in mathematics, including geometry and trigonometry, and science, including astronomy and physics. They’re also important in engineering, architecture, and design.

Before moving on with this section, review angles and types of angles.

Turning an object $360$ degrees gets it back to its starting position and original orientation.

A 360 degree angle and a zero angle might look the same. This is because if an object rotates zero degrees or $360$ degrees, the end result is the same.

The process, however, is different. In once case, nothing has moved. In the other case, the object has made a full circle.

The most classic example of a full angle is the unit circle.

This is a circle with a radius of one centered at the origin. Such a circle has a circumference of $2\pi$, and the arc length of any section of the circumference has the same length as the radian measure.

These circles are used in trigonometry because it is easy to draw right triangles in this circle that have simple measurements, making trigonometric ratios easy to find.

The total angle measure of the unit circle is $360$ degrees. When dealing with angles greater than $360$, ratios are found by subtracting $360$ degrees or $2\pi$ radians as many times as needed until the result is a number, $k$, greater than or equal to $0$ and less than $360$. Then, the ratio for the initial angle is equal to the ratio at $k$.

This section goes over common examples of problems involving full angles and their step-by-step solutions.

Prove that a quadrilateral has an internal angle sum equal to $360$ degrees.

There are a few ways to do this. One way involves knowing that a triangle has an internal angle sum equal to $180$ degrees or the measure of a straight line.

This fact has been known since antiquity and can be proved without measuring the angles. In fact, Euclid has a proof of this fact in his Elements in proposition 32. 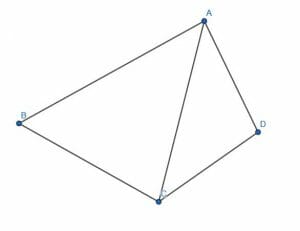 But, two straight lines is a full angle. Therefore, the internal angle measure of a quadrilateral is $360$ degrees or $2\pi$ radians.

Find an angle greater than or equal to $0$ degrees and less $360$ that is equivalent to $567$ degrees. Classify this angle.

Therefore, to find an angle with the same properties, subtract $360$ degrees or $3\pi$ from an angle repeatedly until the difference is a number between $0$ and $360$.

An analogue clock reads 4 o’clock. After the minute hand makes a $360$ degree turn, what time will it be? How many degrees will the hour hand have turned in the same time?

A circle has a radius of $4$. Find the length of a segment of circumference with an arclength of $360$ degrees.

The arclength of a segment is the length of a circle’s circumference that is contained by a given angle formed by the center of the circle and two radii.

An arclength of $360$ degrees means the angle formed by the two radii is a full angle. But, this is also the total interior angle of a circle. Therefore, the length of the segment of the circumference contained by this angle is the full circumference.

Show that the sum of an interior angle and its corresponding exterior angle in a polygon make a full angle.

The interior angle of an angle in a polygon is the smaller of two possible angles. The other angle, which will be a reflex angle, is the same angle measured in the opposite direction (clockwise or counterclockwise).

These two angles, when put together create a circle. Therefore, their angle measure is $360$ degrees or $2\pi$ radians, the same as a full angle.