A reflex angle is an angle greater than a straight angle and less than a circle.

Reflex angles, like other types of angles, are important in many areas of science, mathematics, and engineering.

Before moving on with this section, read over angles and types of angles.

What is Reflex Angle?

A reflex angle is an angle greater than a straight angle but less than a circle.

Sometimes, obtuse angles are defined as any angle greater than a right angle, $90$ degrees, or $\frac{\pi}{2}$. But, a more precise definition specifies that an obtuse angle is also less than a straight angle. That is, it must be less than $180$ degrees or $\pi$ radians.

For this reason, reflex angles may occasionally be categorized as obtuse angles or as a special type of obtuse angle. It is more precise, however, to categorize them as a separate type of angle entirely.

To imagine a reflex angle, picture any acute or obtuse angle.

Then, instead of measuring that angle, measure the wider angle formed by the rays. This will be a reflex angle.

Recall that a polygon is any closed figure made of only straight lines.

A concave polygon, however, has at least one reflex angle

A reflex angle is an angle that is larger than a straight angle but smaller than a circle.

For any reflex angle $\alpha$ the following are true.

Some examples of the measures of reflex angles in degrees are:

Some examples of the measure of reflex angles in radians are:

Prove that the external angles of a triangle are always reflex angles.

The exterior angles of a triangle are the angles of the triangle measured in the opposite direction. They are the larger angles that lie outside the triangle. 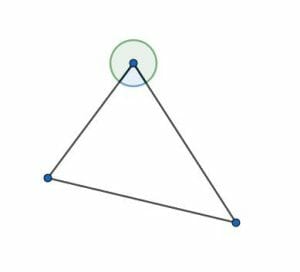 Note that the two angles, together, make a complete circle. Additionally, recall that the sum of the interior angles of a triangle is $180$ degrees and that each angle inside a triangle is greater than the zero angle.

Thus, all three of these exterior angles are between $180$ degrees and $360$ degrees not inclusive. By definition, these angles are reflex angles.

Find the sum of the external angles of a triangle.

Additionally, it is known that the interior angles of a triangle measure $180$ degrees.

Prove that the sum of an obtuse angle and a right angle will always be a reflex angle.

In this case, the measure of the right angle in degrees is $90$ degrees. Such an angle has a measure of \frac{\pi}{2}$ radians.

Is there an angle supplement for a reflex angle? If so, what is it?

Whether or not there is an angle supplement for a reflex angle depends on the system being used.

In radians, the measure of the supplementary angle will be between $0$ and $-\pi$ radians not inclusive.

Prove that the angle $BAD$ is a reflex angle. 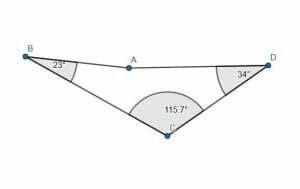 The angle $BAD$ is one of four angles in the quadrilateral $BADC$. It is known that the interior angles of a quadrilateral measure $360$ degrees. Therefore, the measure of $BAD$ is equal to $360$ minus the sum of the other three angles. Fortunately, these three angles are given.