An acute angle is an angle larger than a zero angle and smaller than a right angle.

Acute angles are used mathematically in geometry, trigonometry, and calculus. They also have applications in science and engineering fields, including astronomy and architecture.

Before moving on with this section, make sure to review angle properties and types of angles. A quick review of triangles might also help.

What is an Acute Angle?

An acute angle is an angle with a measure less than the measure of a right angle. Since many systems (including those used for trigonometric functions) make use of negative angles, definitions usually stipulate that an acute angle must also be greater than a zero angle.

An easy mnemonic for remembering the definition of acute in English stems from the common use of the word “cute” to describe something small, like a puppy. Consequently, acute angles are small angles.

All triangles have at least two acute angles.

This is because a triangle with two right angles has a third angle with a measure of $0$, so such a “triangle” is actually a straight line. If a triangle has two or more obtuse angles, its interior angle measure exceeds $180$ degrees.

If, however, all three angles are acute, then the triangle is an acute triangle. This can happen if, for example, each angle is $60$ degrees in measure. Such a triangle has an interior angle measure of $180$ degrees, but the individual angles are each smaller than a right angle.

Complementary angles are two angles that, together, have the measure of a right angle.

Assuming both angles are positive, two complementary angles will both be acute.

An acute angle is an angle less than a right angle but greater than a zero angle.

In degrees, examples of acute angles include:

In radians, examples of acute angles include:

Classify each angle as acute or not acute.

In this case, angles B and D are acute while angles A and C are not.

For problems involving radians, look at the coefficient of $\pi$. If it is less than $\frac{1}{2}$ and greater than $0$, the angle is acute.

C is a negative degree measure. This means the angle is less than a zero angle, so it is not acute. Note that this only matter when the orientation of the angle in space matters or when used algebraically.

The last angle, D, however, is between $0$ and $90$ degrees not inclusive. Therefore, it is acute.

Is the following triangle acute? Why or why not? 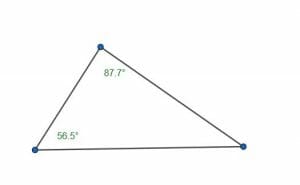 This triangle is acute.

Find the angle complement for an angle with a measure of $\frac{4}{9} \pi$ radians.

The angle complement of an angle is another angle that can be added to the first to create a right angle.

This is equal to:

What is the fewest number of acute angles necessary to create a straight angle?

Recall that a straight angle is equal in measure to two right angles. In degrees, it is $180$ degrees. It is also equal to $\pi$ radians.

For example, two angles with measure $89$ degrees and $88$ degrees have a sum of $177$ degrees. An additional $3$ degree angle would create a straight line.

Consider a circle with a center $A$ and two distinct points $B$ and $C$ on the circumference.

Prove that the angle $ACB$ is acute for any point $C$ on the circumference of the triangle. 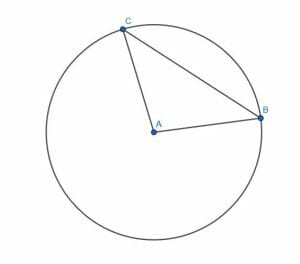 First, note that the line segments $AC$ and $AB$ have the same length because both are radii of the same circle.

Therefore, the triangle $ABC$ will always be at least isosceles and sometimes equilateral.

But, an isosceles triangle always has equal base angles. This means that the angles $ACB$ and $ABC$ will always be equal, no matter where $C$ is on the circumference.

These two angles cannot be obtuse because the total internal angle measure of the triangle would then be greater than two right angles.

Therefore, both angles must be acute. In particular, then $ACB$ is acute for any distinct point $C$ on the circumference.