Discrete data is data that only occurs at certain intervals.

Continuous data is the opposite of discrete data since it includes all possible numbers. While the interval for discrete data is often $1$, it can be any real number.

All areas of math and science include discrete data. It is important for young children just learning math and for doctoral candidates studying graph theory. In fact, there is an entire branch of mathematics called discrete data focuses on the study of non-continuous structures.

What is Discrete Data?

Think of the integers. The set of integers are discrete because they do not include, for example, the numbers between $0$ and $1$ or between $1$ and $2$.

Sometimes data is discrete because the instruments used to measure it have limited accuracy. For example, a thermometer may only measure to the nearest one-tenth of a degree, so temperatures would only be recorded to the nearest tenth.

Other times, data is discrete because the variable itself is non-continuous. For example, American currency is measured in increments of $0.01$. It would not make sense to say that someone has $\frac{3}{8}$ of a cent or $\sqrt{2}$ cents.

Note that, more often than not, discrete data is defined as non-continuous data.

For example, consider a function that takes a student’s age and spits out the student’s grade. Suppose a state says, for example, that all students who turn $5$ between September 1 of the previous year and August 31 of this year can enter kindergarten this year. The age of the students is continuous because a student could, theoretically, be $5.6293$ years old at a given moment. However, the grade that a student is entering is discrete. This function would take all students who are from $5.0$ to $5.9999$ years old on August 31 and map them to $0$ (for grade 0, kindergarten).

In this case, then, a floor or ceiling function maps a continuous variable onto a discrete variable.

Suppose Amy goes to the store and buys boxes of cereal. How many boxes can she buy?

Cereal is sold by the box. Therefore, one cannot buy fractions or decimals of a box. And certainly no one buys an irrational number of boxes!

As mentioned before, although $1$ is a common interval for discrete data, it is not the only one.

Certainly someone could have a foot that is larger than a $6 \frac{1}{2}$ and smaller than a $7$, but such a person would probably just have to go a size up.

This section goes over common examples of problems involving discrete data and their step-by-step solutions.

A school is planning a field trip. They want to take students on buses that each carry $54$ people.

There are $625 people who plan to attend the field trip. How many buses should the school rent for the day?

One must consider the answer in context though. Dividing $625$ by $54$ yields $11.5\bar{740}$. It doesn’t make sense for the school to rent out a repeating decimal of school buses!

Most likely, the school would prefer the latter case and decide to round up to $12$ school buses.

An electric company, a gas company, a water company, and an internet company all want to run lines to $5$ homes in a particular neighborhood.

Each utility wants to create a line that goes from its headquarters to each home. How many connections do they make?

This is actually a combinatorics problem

Combinatorics is the study of counting combinations and arrangements. It is an important branch of discrete mathematics.

This type of problem is a matching problem and involves creating connections between two or more different categories. In this case, the categories are homes and utilities.

To connect the $4$ utilities to the $5$ homes requires making a connection from each utility to each home.

A more interesting version of this problem involves being able to tell whether or not these connections will cross, but that is beyond the scope of this article. 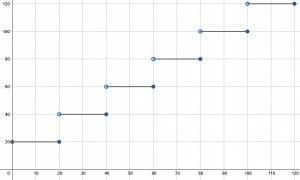 This is a kind of ceiling function that uses twenties instead of ones.

Typically, a ceiling function takes all numbers greater than, say, $0$ and less than or equal to $1$ and maps them to $1$.

Such a graph will be a series of horizontal lines $20$ units in length and at intervals of $20$. The left side of these bars will be an open dot and the right side will be a closed dot. This is because if someone needs more than $20$, even $20.01$ dollars, they need to get $40$ from the ATM because $20$ will be insufficient.

Is it possible for a measure of centrality for a discrete data set to fall between counted intervals? How should this be interpreted?

As discussed previously, there are many measures of centrality, but the most common ones are mean, median, and mode.

Mode cannot be a number outside possible values for the data set. This is because mode is the most commonly occurring value, which must be a value that is possible to achieve.

Mean, however, can be any rational number with a denominator equal to the number of terms in a data set. This means that it can be outside possible values.

Likewise, what happens when the mean number of students is $21.5$?

Categorize the following examples of data sets as discrete or continuous or neither.

A. A star-based rating system for restaurants.

C. The mass of leftovers at a restaurant.

Option A is discrete, option C is continuous, and option B is neither. In particular, options B is qualitative data that is not easily coded as quantitative data.

How does one determine this? Basically, start by asking whether each thing is countable. Is the number of stars a restaurant has countable? Yes. It can either have one, two, three, four, or five stars. But is the mass of leftover food countable? No. It is possible to have 4.293 pounds of leftover food. And, when it comes to favorite restaurants, numbers are not even involved.