Even and Odd Identities – Explanation and Examples

Even and odd identities for trigonometric functions involve using the trig function’s evenness or oddness to find the trig values of negative angles.

Specifically, sine, tangent, cosecant, and cotangent are odd functions. The cosine and secant functions are even.

Like all trig identities, the even and odd identities play an important role in physical sciences and engineering.

Before moving forward with this section, review even and odd functions and trig identities.

Recall that an odd function is a function $f(x)$ such that $f(-x) = -f(x)$. That is, corresponding positive and negative inputs have outputs with the same absolute value. The signs of these outputs, however, will be different.

Reflecting an odd function over the $x$ axis and then over the $y$ axis (or vice versa) maps the function to itself. That is, odd functions are symmetric about the origin.

In trigonometry, the functions sine, cosecant, tangent, and cotangent are odd. This fact gives the four odd identities:

Even identities in trigonometry are identities that stem from the fact that a given trig function is even.

Recall that an even function is a function $f$ such that $f(-x) = f(x)$. That is, corresponding positive and negative inputs have the same output. Such functions are symmetric about the y-axis, and reflecting them over the y-axis maps them to themselves.

There are two even trig functions, cosine and secant. Therefore, there are two trigonometric even identities:

There are no even inverse trig functions.

How Do You Tell If a Sine Function is Odd or Even?

It is possible to determine whether a trig function is even or odd algebraically or graphically.

Doing this graphically is easier. If the y-axis is a line of symmetry for the function, then it is even. If the function is symmetric about the origin (rotating it 180 degrees or reflecting it over both axes), then it is odd.

Algebraic Proofs of Even and Odd

With trigonometric functions, this is done by looking at the basic definitions of sine and cosine in the context of the unit circle.

Similarly, the sine of $BAF$ is $FH$, and the sine of $BAG$, the corresponding negative angle, is $HG$. These two lines also have the same magnitude but different sines.

Therefore, the sines of two angles with an equal magnitude but measured in the opposite direction will have the same magnitude but different signs. Therefore, sine is odd. 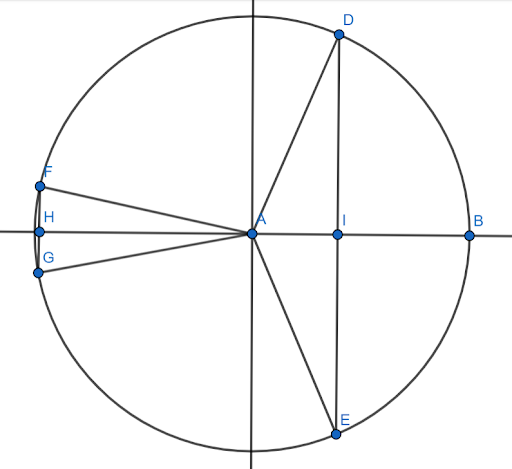 Notice, however, that the cosines (the horizontal line of the right triangle of the angle) are on the same side of the x-axis. For $BAD$ and $BAE$, it is $AI$. For $BAF$ and $BAG, it is $AH$. Therefore, the cosine does not change based on the sign of the angle. Thus, cosine is even.

Even and Odd Transformations

Note that transformations of the function can affect whether they are even or odd.

Transformations can also make it so that a function is neither odd nor even. The transformation $sin(x)-1$ is an example.

This section goes over common examples of problems involving even and odd trig identities and their step-by-step solutions.

Use the evenness and oddness of sine and cosine to prove that the tangent function is odd.

It is required to show that tangent is odd. That is, that:

Since sine is odd and cosine is even, this simplifies to:

A simple way to test whether a function is even, odd, or neither is to find the value of the function for a negative angle and positive angle with the same magnitude. In this case, use the angles $\frac{\pi}{2}$ and $-\frac{\pi}{2}$.

Therefore this function is neither odd nor even.

Recall that the secant function is the reciprocal of the cosine function. That is, $secx=\frac{1}{cosx}$. Like cosine, it is even.

1. Prove that cotangent is odd using odd and even identities.

2. Use the even and odd identities to prove that $\cos x \sin^2 x$ is an even function.