In the field of mathematics, factorization is the process of breaking a larger number into pairs of two smaller numbers. Factors of a number are termed as its divisors such that these are the set of positive and negative numbers that completely divide the given number.

Factors of 56 are referred to as a set of integers that when divided by the number 56, result in producing a perfect whole-number quotient, leaving a zero remainder behind.

As, the number 56 is completely divided by 2, and no remainder is left behind, therefore, the number 2 is referred to as a well-defined factor of 56.

These are all the problems that will be covered in depth, in the following article.

What Are the Factors of 56?

Given that, all the aforementioned numbers are the set of whole numbers that when present in pairs, resulting in producing 56 as their product.

Since 56 is an even composite number, it has more factors besides simply itself and 1.

In other words, the total number of factors of number 56 is 8, as stated above.

How To Calculate the Factors of 56?

You can calculate the factors of 56 by determining the whole numbers that are completely divisible by 56. The division and multiplication procedures are the two primary methods used to determine the factors of any given integer. 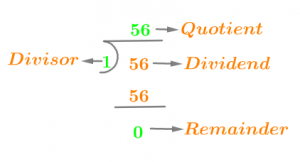 Yes, the remainder is zero. Also, the result of the division is a perfect whole-number quotient. Hence, the number 1 is a well-defined factor of 56.

In addition, as the remainder of the above division process is zero, therefore, 2 is also referred to as the well-recognized factor of 56.

Continue to divide 56 by the remaining set of numbers using the method described above.

The number 56 has both positive and negative integer factors, just like all the other numbers. The only difference between the two sets of factors is the sign. The negative factors of 56 are those integers that, when stated as a mathematical symbol, include a minus sign in addition to the suggested arithmetical value.

In simple words, the negative factors of 56 are referred to as the additive inverse of its positive factors.

The following is the list of the negative factors of 56.

Similarly, the following is the list of the positive factors of 56.

Now, let’s start the multiplication of 56 by the different sets of integers.

The following is the list of pair-multiplication for the number 56,

Similarly, the further factors are given as:

Factors of 56 by Prime Factorization

Prime factorization is the process of splitting a number into its prime or distinct prime factors. Given that, the prime factors of a given number are a set of prime numbers that when multiplied together in pairs, resulting in the original number to which they are a factor.

Besides, division and multiplication, prime factorization is also a widely used technique used to find the well-recognized factors of a number.

Here, we are going to use the famous upside-down methodology to determine the factors of 56 by prime factorization. The following technique is also referred to as the ladder method since the division is shown visually in a ladder-like fashion. 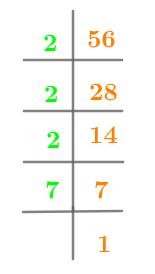 The prime factorization of 56 can also be expressed as the following expression,

Here are a few fun facts regarding the factors of 56,

The prime factor of a given number (m) can be any integer that satisfies the requirements outlined in the definition of prime factors, but never 0 or 1, as these values are not properly characterized as prime numbers.

A factor tree is a geometric portrayal of a number’s factors in which the prime factors are represented through its branches such that, these factors may be any number other than one.

To ascertain a number’s nature, a factor tree is employed. It may foretell if a number is square, cubic, or prime. The factor tree may also be used to determine the L.C.M and H.C.F.

The following image shows the factor tree of the number 56. 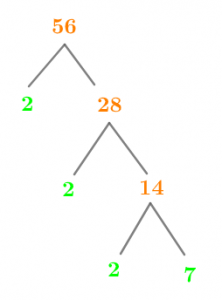 The factors of the given number are represented in each row of the factor tree however, the well-defined set of prime factors for the number 56 is created by combining the last known factor i.e. number 7 (shown on the right side of the figure) with the numbers listed in the left column i.e. 2, 2, 2.

Also, it is visible from the factor tree that the number 56 is non-prime.

Factors of 56 in Pairs

As was already mentioned above, when two factors of a given number (m) are multiplied in pairs, the outcome of the multiplication is the original number. Now, the question that arises here is what are these pairs termed as?

The answer to the above question is pair of factors. Yes, the pairs that combine to produce the original number are referred to as the factor pairs or pairs of factors. 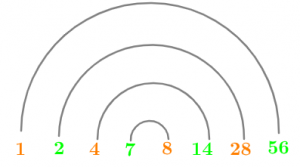 Hence, the positive factor pairs of the number 56 are given as:

The pair of factors are described in terms of both the positive and negative integers.

Therefore, the negative factor pairs of 56 are given as:

Now, let us solve a few examples to test our understanding of the above article.

Samir wants to find out which two odd numbers, from 1 to 9, are not a factor of 56. Can you help her in finding the correct answer?

From the aforementioned list, we can clearly say that the numbers 3 and 5 are the two odd numbers, from 1 to 9 that are not factors of 56.

Windy wants to calculate the H.C.F of the numbers 26 and 56. Can you help her in finding the correct answer?

According to the definition of H.C.F, the largest number that divides both the numbers 26 and 56 completely, is termed as their H.C.F.