The QR Factorization Calculator is an online free tool that breaks down the given matrix into its QR form. The calculator takes the details regarding the target matrix as input.

The calculator returns two matrices Q and R as the output, where Q means an orthogonal matrix and R is an upper triangular matrix. 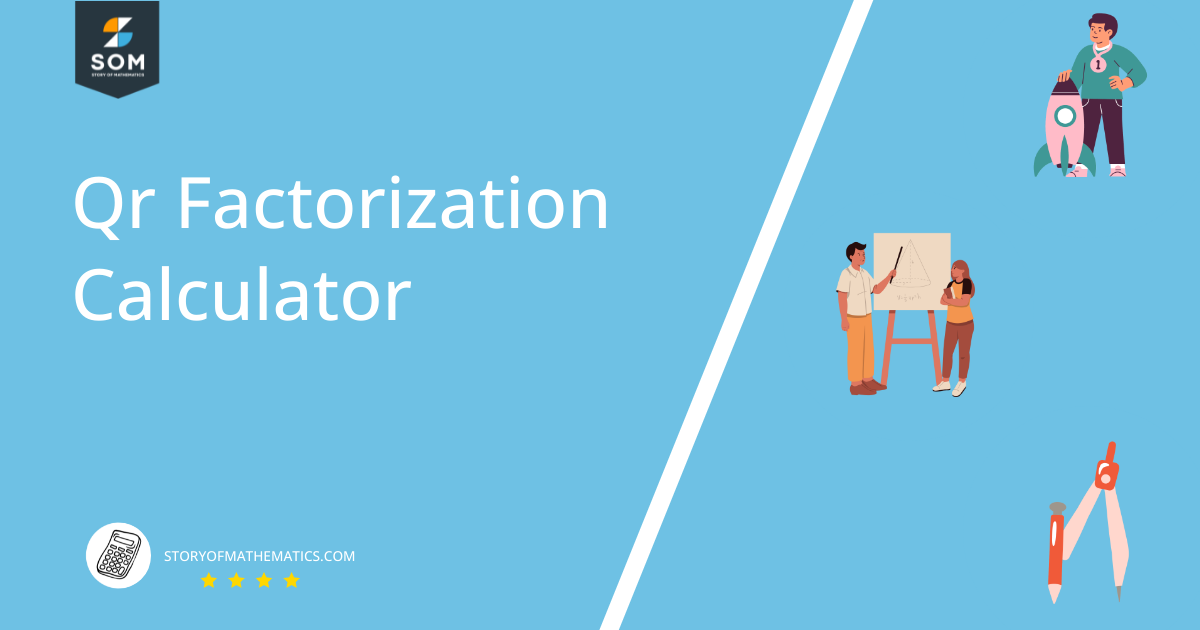 What Is a QR Factorization Calculator?

A QR Factorization Calculator is an online calculator specifically designed to quickly perform the QR decomposition of the matrices.

QR Factorization is one of the most important concepts in linear algebra. It has various applications in areas of data science, machine learning, and statistics. It is generally used to solve least square problems.

It is quite difficult to deal with matrices like performing the multiplication of two matrices. The process of solving the matrices manually is a stressful and time-consuming task. The complexity of the problem rises with the increasing order of the matrix.

Furthermore, there’s a chance that after going through this tiresome process, your results will be incorrect. Therefore we offer you an advanced QR Factorization Calculator that makes your life easy by performing all the processes in a few seconds.

This is a credible and effective tool because it provides the users with 100 % accurate solutions.

How To Use the QR Factorization Calculator?

You can use the QR Factorization Calculator by putting the rows of the matrix in their respective labeled spaces.

The interface is made brief and simple for comfortable use. You can follow the given step-by-step procedure to get accurate results for the problem.

Enter all the entries of the first row of the matrix in the Row 1 box. Separate each entry with a comma.

Similarly in the Row 2 tab place the elements of the second row of the matrix. Then put the values in the third row of your matrix in the Row 3 box. It can have a maximum of three rows but you can increase the number of columns.

At the last, press the Submit button for the final answer.

The first matrix of the result has orthonormal columns and is denoted as the A matrix whereas the second matrix is denoted by R with non-zero values above the diagonal of the matrix.

How Does the QR Factorization Calculator Work?

This calculator works by finding the QR decomposition of a given matrix. It decomposes the matrix into its orthogonal matrix and an upper triangular matrix.

What Is the Matrix Decomposition?

Matrix decomposition is the technique of reducing the matrix into its components. This method applies the matrix operations on the decomposed matrices. It reduces the complexity because the operations are not performed on the matrix itself.

The matrix decomposition is also called matrix factorization since it is similar to reducing the numbers into its factors.

The QR decomposition provides the method to express the given matrix as the product of two matrices that are the Q matrix and the R matrix. The ‘Q’ is the orthogonal matrix and the ‘R’ is the upper triangular matrix.

The formal definition of this decomposition is given below.

If A is the m x n matrix having linearly independent columns, then A can be decomposed as:

Where Q is an s x n matrix having columns that form an orthonormal set and R is an n x n upper triangular matrix.

There are many methods to determine the QR factorization but the most popular method is the Gram-Schmidt process.

What Is the Gram-Schmidt Process?

It can be mathematically defined as follows.

The second orthogonal vector $u_2$ which is also of unit length should lie in the same plan S in which the linearly independent vector lies. This can be done by using vector projections.

The projection of $s_2$ on $u_1$ is given by following expression:

And then finding the unit vector given by

How To Determine the QR Matrices?

The QR matrices can be determined using the Gram-Schmidt method. It is a process used to transform the matrix A having linear independent columns into the Q matrix having orthogonal columns.

The R is the upper triangular matrix whose entries are coefficients of projections obtained in the Gram-Schmidt process.

Here are some solved examples by the QR Factorization Calculator.

A maths student is given a matrix of order 3 x 3 in the exam. He is asked to perform the QR Factorization of the following matrix.

Using the calculator gives the answer given below.

Where orthogonal matrix Q is given as:

And the upper triangular matrix R is as follows:

Consider the following matrix and decompose it in the QR form.

The QR form for the above problem is given as: