An obtuse angle is an angle larger than a ninety degree angle and less than a straight line.

Before moving on with this section, make sure to review angle types and their properties.

What is An Obtuse Angle?

An obtuse angle is larger than a right angle and smaller than a straight line.

Sometimes, any angle greater than a right angle is considered obtuse. Angles greater than straight lines and less than a circle are also considered reflex angles. This section will make this distinction.

One reason to make this distinction is the definition of an obtuse triangle.

This is also another reason to distinguish obtuse angles and reflex angles. That is, there cannot be a reflex triangle.

Alternatively, an obtuse angle is any largest angle in an obtuse triangle.

Alternatively, since obtuse angles include any angle with more than $\frac{\pi}{2}$ radians and $\pi$ radians, they include:

Classify the following angles given the degree or radian measure.

The first and third angle measures are measures of an obtuse angle. The second and fourth, however, are not. Specifically, both of them are reflexive angles, or angles greater than a straight line but less than a circle.

Let a triangle $ABC$ have two known angles measuring $41$ and $31$ degrees. Is the triangle obtuse? Why or why not?

Prove that the angle $ACD$ in the figure $ACDB$ is obtuse. 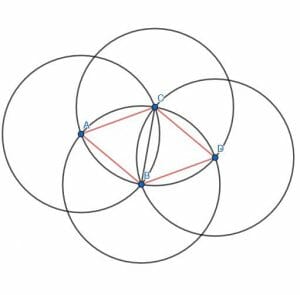 Begin by noting that the triangles $ABC$ and $CBD$ are congruent equilateral triangles.

But, the two triangles have a common side, $CB$. Therefore, all of the sides are the same length.

Consequently, then, the angle $ACB$ must be equal to $60$ degrees as must the angle $DCB$.

Prove that the interior angles of any regular n-gon with $n>4$ has only obtuse angles.

This problem primarily relies on knowing that an n-gon has a total interior angle sum of $180(n-2)$.

Therefore, when $n > 4$, the interior angles of any regular polygon are all between $90$ and $180$ and are consequently obtuse angles.

Two angles make up a circle. One of the angles is obtuse. What is the range of degree and radian values for the second angle?

Recall that supplementary angles are angles which, when put together, make a straight line. That is, their sum is $180$ degrees or $\pi$ radians.

An angle which, when put together with an obtuse angle, makes a circle will be the sum of a straight line and the angle supplementary to the obtuse angle. 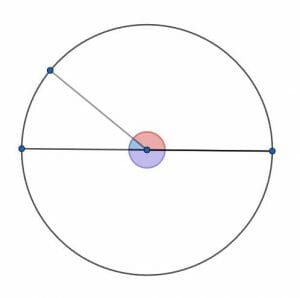 In radians, this is an angle greater than $\pi$ radians and smaller than $\frac{3\pi}{2}$ radians.