A right angle is one-half of a straight line or one-fourth of a circle.

A right-angle is equal to ninety degrees or $\frac{\pi}{2}$ radians.

Right angles are ubiquitous in geometry, trigonometry, and even calculus. They are also an important input for many functions.

Before moving on with this section make sure to review types of angles and angle properties.

What is a Right Angle?

A right angle is half of a straight line. It is the angle formed when a vertical line and a horizontal line meet or when such an angle rotates through space.

Euclid defines a right angle as:

That is, Euclid defines a right angle as one that makes two angles equal. Essentially, he defines it as half of a straight line.

While these measurements are often used as the basis of the definition of a right angle, using them is not the best definition since units of measurement change over time.

What does three right angles looks like? Think of the angle measured counterclockwise between the minute hand and the hour hand of a clock when it is three o’clock. 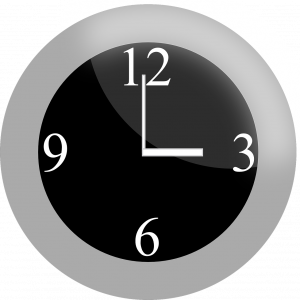 Using only a ruler and a compass, construct a right angle.

There are multiple ways to do this, but this solution will use the method Euclid described in his eleventh proposition in his first book.

Begin with a straight line, $AB$.

Finally, draw a line from $AB$ to $CD$. These two lines will meet at a right angle. 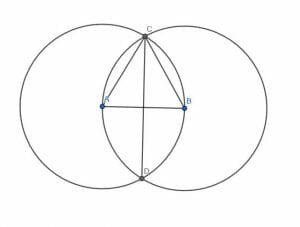 To prove this, begin by drawing lines connecting $A$ and $B$ to $C$.

Call the point where the line $CD$ intersects $AB$ $E$. The proof depends on what knowledge is assumed. 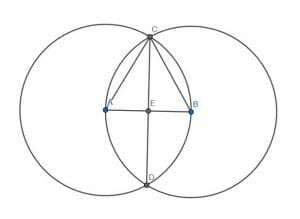 Is the angle $ACB$ below right? Why or why not? 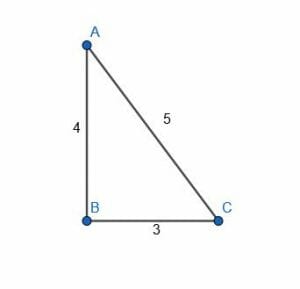 The angle $ACB$ is a right angle because it is the largest angle in a right triangle.

The key to this problem lies in knowing that the triangle is right. There are two facts that, when combined, indicate this.

SSS congruency is side-side-side congruency. This means that if two triangles have all of the same side measures, their corresponding angles are also the same. That is, there is only one way to construct a triangle with three given lengths (and then only if the lengths satisfy the triangle inequality, which states each length must be less than the sum of the other two).

The second fact, the Pythagorean Theorem, states that, in a right triangle, the sum of the squares of the two sides forming the right angle is equal to the square of the third side. Famously, this is written as $a^2+b^2=c^2$.

But, SSS congruency asserts that if there is only one triangle with side lengths of $3, 4$, and $5$ units. Therefore, this triangle must also be a right triangle and the angle formed when the legs of length $3$ and $4$ meet is the right angle.

Let $AC$ be a diameter of the circle with center $C$ and radius $CB$ and let $D$ be any point on the circumference of the circle. Show that triangle $CDB$ inside the circle is a right triangle with $CDB$ as a right angle. 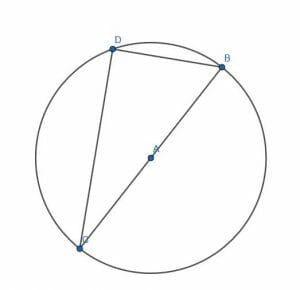 The proof requires a little bit of construction.

First, draw a straight line connecting $D$ and $A$. Then, extend this line to a point E on the other side of the circle. 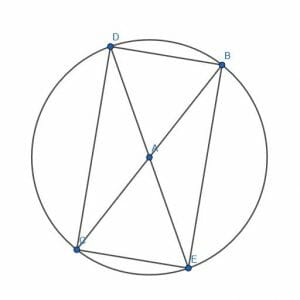 Note first that the line $DE$ is a diameter because any line connecting two points on a circle’s circumference and passing through the center is a diameter.

Therefore, the segments $AB$, $AC$, $AD$, and $AE$ all are radii of the circle and consequently have the same length.

Next, note that the angles $DAB$ and $CAE$ are equal because they are vertical angles. Similarly, $CAD$ and $EAB$ are equal.

Then, by SAS (side-angle-side) congruency, the triangles $DAB$ and $CAE$ are congruent as are the triangles $CAD$ and $EAB$. This means that the corresponding bases are equal. Specifically, $DB$ and $CE$ are equal as are $DC$ and $BC$.

In addition, because the radii are all equal, each of the triangles $DAB$, $CAE$, $CAD$, and $EAB$ are isosceles triangles. This means that their base angles will be equal to each other. Specifically, the angles $ADB$, $DBA$, $ACE$, and $CEA$ are all equal as are $ABE$, $BEA$, $ADC$, and $DCA$.

Therefore, the angles $DBE$ and $CDB$ must also have the same measure. But, since this is a parallelogram, $BEA = CDB = DBE = ECD$. Thus, all of the angles are the same.

Thus, since each angle, and in particular the angle $DBE$, has a measure of $90$ degrees, each angle is a right angle.

Use a right triangle to find the sine of a right angle.

Recall that sine is a function with angles as an input and ratios as an output.

Specifically, sines are the ratio of an angle’s opposite angle divided by the hypotenuse in a right triangle.

If the angle in question is the right angle, then the hypotenuse and the opposite side are one and the same. Therefore, the ratio is $1$.