Quadrantal angles are angles whose terminal ray lies along with one of the two axes in a unit circle.

Therefore, all quadrantal angles are whole number multiples of a right angle.

Quadrantal angles play an important role in trigonometry, and applications extend to physical sciences and engineering.

What is a Quadrantal Angle?

A quadrantal angle is an angle whose measure is a whole number multiple of the measure of a right angle. These angles have a terminal ray that extends along the x or y axis in the unit circle.

In degrees, all quadrantal angles have a measure of:

In radians, all quadrantal angles have a measure of:

Examples of quadrantal angles in degrees include:

In radians, examples include:

This section goes over common examples of problems involving quadrantal angles and their step-by-step solutions.

Identify whether the following angles are quadrantal or not.

A and B are quadrantal angles, but C is not.

Find the sine of all four main quadrantal angles.

In fact, if the angle became zero, the opposite side would have no length. Since sine is equal to opposite over hypotenuse, its value would be zero as well.

On the other hand, if the angle were to get bigger and bigger, the length of the opposite side would get larger and larger along with the hypotenuse. The two would get closer and closer to the same length. Therefore, the limit of the sine as the angle goes to a right angle is $1$.

It is harder to imagine what happens as sine increases beyond a right angle without a unit circle. 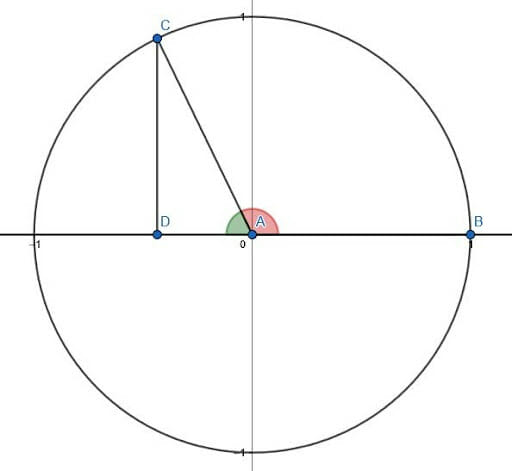 The sine of the red angle will be the same as the sine of the green angle. This is almost the same as the reflected version of the triangle that has moved over the y-axis. Therefore, as the terminal side $AC$ moves toward the x-axis and $C$ converges to the point (-1, 0), the height goes to $0$. Thus, the sine of $180$ degrees or $\pi$ radians is $0$.

Similarly, as the terminal angle moves to $270$, the length of the hypotenuse and the opposite side again converge. This time, however, the opposite length is negative, so the limit of sine as the angle goes to $270$ degrees or $\frac{3\pi}{2}$ is $-1$.

Identify the quadrant of the angle $191$ degrees.

This angle lies in the third quadrant because it is greater than $180$ degrees and less than $270$ degrees.

Note that these types of problems are generally pretty straightforward when the given angle is between $0$ and $360$ degrees or $0$ and $2\pi$ radians. But, as the next example shows, they can be a bit trickier for larger angles or negative angles.

Therefore, to find the quadrant, it is necessary to find the standard angle equivalent to $\frac{18\pi}{7}$.