A scatter plot is a graph that displays all of the data points for a set of data.

These graphs are important for all subjects that use statistics and data analysis.

What is a Scatter Plot?

A scatter plot is a graphical display of bivariate data. That is, scatter plots show data that consists of two variables measured quantitatively.

Examples of bivariate data include the age and height of students at a school, the length and width of houses in a subdivision, and the temperature and humidity in a city.

A scatter plot graph consists of dots plotted along an $x$ and $y$ axis corresponding to each data point in a set. If there are $50$ data points in a set, there will be $50$ dots on the graph.

For example, suppose a set of data includes the age (measured in months) and height (measured in inches) of students. If a student was $60$ months old (5 years) and had a height of $42$ inches, the data point is $(60, 42)$. Note that since this data set includes age, that is the independent variable. This makes sense because height depends on age, not the other way around.

Continue in this manner for each of the data points in the set.

Why Are Scatter Plots Important?

Scatter plots are important because they give a lot of information about a data set in a visual way.

Most importantly, a scatter plot shows the overall shape of the data set.

Quickly glancing at a scatter plot helps to answer these questions. Even if a regression line is not included, most people can visually approximate it and get a good sense of the data. This is not true when looking at a large set of numbers.

Often, however, regression lines are included with the scatter plot. This makes it easy to identify whether or not the association between the two variables is strong. It is also easy to determine whether the slope of the line is positive or negative.

Scatter plots do more than that though. They also show the domain and range of the data set and show the number of points. It is easy to see outliers and clusters on a scatter plot as well.

Finally, scatter plots allow the analyzer to see individual data points. Therefore, it is possible to write out the data set using the scatter plot.

Causation, on the other hand, specifically says that increasing one variable causes a corresponding increase or decrease in the other variable.

There is an important distinction between these two terms.

For example, it makes sense that a puppy’s weight would increase as its age increases. The aging is causing growth.

This third variable is called a confounding variable. It is for this reason that a scatter plot can show a relationship between two variables but not necessarily prove that one thing causes the other to increase or decrease.

Regression lines approximate a linear relationship between two variables based on a sample. A regression line can have a positive or negative slope. It can also have a slope of $0$. These lines can cross the $y$ value at any point.

Regression lines are used to make estimates about future points or points that are not included in the sample. They can also make generalizations about average values for certain points.

Sometimes, however, data is not linear. It could be exponential, quadratic, or bell-shaped. While it is still possible to make a regression line for data like this, and perhaps even have a somewhat good correlation coefficient, such a line might not make useful predictions.

The slope of the line, its graph, and the correlation coefficient will not show whether or not this is the case. Instead, a regression line plotted on a scatter plot with the data points makes it clear whether the points have a linear or shape or take on some other kind of shape.

Like a regular scatter plot, each bubble on a bubble chart is centered around a specific point on the $xy$-plane. The bubble, unlike the scatter plot’s dot, has a size. This size gives information about the third variable.

For instance, a bubble chart can show the the cost to produce products on one axis, the demand for the product on another, and use bubble size to represent the cost to make the product.

Imagine an insurance agent notices that her company gives out a discount for having had a good college GPA. She wants to see if there is a relationship between GPA and driving safety to justify this discount. How would she do this?

First, she would find a sample. She would need to make sure everyone in the sample had gone to college and had both their GPA and the number of traffic incidents in some span of time. She may opt for the last year, the last five years, or the last ten year.

Finally, the agent would plot each of the points on a graph. In most cases, she would also find the regression line for the data. She can then analyze this graph to see if there is a trend, identify outliers and clusters, and make sure the line closely fits the data. 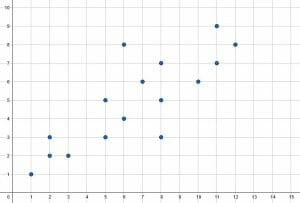 Describe the scatter plot shown. Include the range of the $x$ and $y$ values, the number of values, and the overall trend of the data.

There are no clear outliers or clusters. 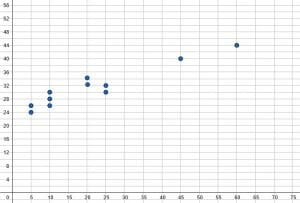 Use the scatter plot shown to make a list of the data points in the set.

Then, use the scatter plot to describe the data.

First, it is required to make a list of all the data points.

Based on this graph, it appears that there is a relationship between the $x$ and $y$ variables.

Do this for all of the points. The final graph will look like the one below. 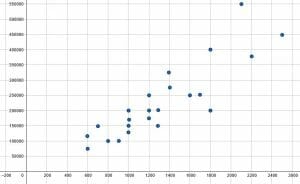 Based on the scatter plot, is there likely a correlation between the two variables? Why or why not? 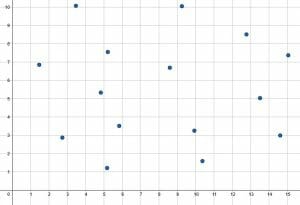 Based on the scatter plot, there does not appear to be a correlation between the two variables.

There is not a clear trend up or down in this scatter plot. Points on the left and ride sides of the graph have a wide range. There are many points towards the top and many towards the bottom with many in between.

If a regression line was drawn for this graph, it would be almost straight, indicating a slop of $0$. Most likely the $x$ variable does not influence the $y$ variable in this case. 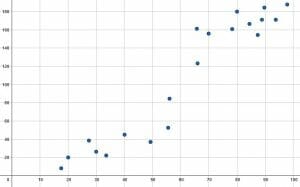 Based on this scatter plot, what can be said about the average temperature and the average sales?

Overall, the average number of sales tends to increase as the average temperature increases. That is, there are fewer sales in cold weather compared to sales in hot weather. This makes sense since the data is for an ice cream vendor.

There are also clusters at the upper and lower ends of the graph with fewer points in the middle. Despite this, there are no clear outliers.

Based on this, it is likely that there is a relationship between the two variables.