All the numbers that perfectly divide the number 69, leave zero in the remainder, and give a whole number in the quotient are called the factors of 69.

Factors of 69 can also be narrated as the product of two numbers that produce the target number 69 when multiplied by each other.

This write-up provides basic information about the details of all the factors of 69 and methods of finding the factors by utilizing various methods, primarily prime factorization and conventional division methods. This article also explains the factor tree method, factors of 69 in pairs, and some examples to describe the concept.

Here are the basic attributes of the number 69, which must be kept in mind to determine the factors of 69.

What Are the Factors of 69?

All the above-said numbers are also divisors of 69 because when the number 69 is subjected to dividing by any of the mentioned numbers, it is divided completely and leaves zero or nothing as a remainder.

How To Calculate the Factors of 69?

You can calculate the factors of number 69 by the application of the traditional division method. For this intention, start dividing 69 by the smallest natural number that divides 69 entirely without leaving any remainder.

Divide 69 by the smallest natural number, which is 1.

Since one has divided the dividend by 69 without leaving any remainder ( r = 0) and producing a whole number in the quotient, 1 is a factor of 69.

Now divide 69 by the next consecutive natural number, i.e., two, which is also the smallest even prime number.

Because two has not divided 69 absolutely, and the quotient is a fraction or decimal. Hence, 2 is not a factor of 69. Due to this reason, 69 is called an odd number as it is not divisible by 2.

For attaining more factors, divide 69 by consecutive natural numbers and check that ultimately divide 69 and leave zero remainders. By doing the stated exercise, we will get to know that after 3, 23 is only the number by which 69 can be divided completely.

After 23, 69 can not be divided by any other natural number except itself. So, divide 69 by itself are below:

It is evident from the division that the number 69 has completely been divided by these numbers and has left no remainder. Therefore, all the numbers 1, 3, 23, and 69 are factors of 69.

Salient Facts About Factors of 69

Factors of 69 by Prime Factorization

Following are the footsteps to find the factors of 69 by the prime factorization method.

The first step in the process is to divide 69 by the prime number, which divides 69 perfectly, that is, 3 in this case.

As the number resulting in the answer is 23, which is also a prime number, it can further be divided by itself only.

The quotient 1 cannot be divided any further.

Therefore, the prime factorization of 69 can be expressed as follows:

69 can also be detonated in the form of its prime factors as:

The prime factorization of 69 is also shown in following figure 1. 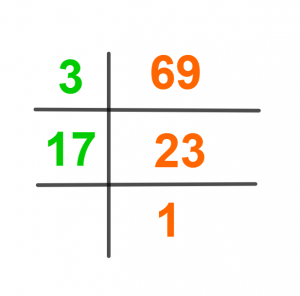 A factor tree is a distinct way of determining the factors of 69. A factor tree is a pictorial representation where the prime factorization of the number 69 is written in the form of a tree whose branches represent the divisors of the said number.

For the given number, considering the rules of division by the factor tree method, If we write 69  into multiples, it would be;

It is important to describe here that the number 69 has produced prime numbers on both of the branches in its first split. Therefore, it cannot be divided into its further branches.

The factor tree of 69 can be represented as following figure 2. 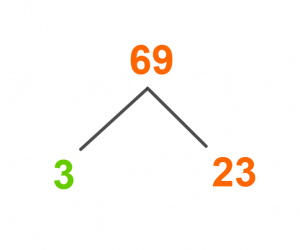 Factors of 69 in Pairs

A set of two natural numbers, which are multiplied with each other to generate the number 69, are called factors of 69 in pairs.

In other words, it is stated as the product of the factors of the number 69 in the structure of pairs.

The number 69 has a total of 4 factors which can be written in pairs as below:

Here are the negative pair factors of number 69:

The class teacher of Steve gave him a math assignment to find out the average of factors of 69. How will he solve the given problem?

As Steve knows that the average can be found by the sum of all the numbers divided by the count of all numbers. Steve will solve the problem by the following technique:

Why is 69 a semi-prime number?

A semi-prime number is defined as any number which is resulted from the multiplication of two prime numbers.

As we know that

In the above equation, both 3 and 23 are prime numbers. Hence, 69 is a semi-prime number.