The period for the calculation is not an input to the calculator; the output is always over the same period as the input. As long as you have the corresponding parameters for a period, you can choose to measure the average over any part of the player’s career.

The calculator does not support variable inputs. No output is displayed if it encounters a character such as x or a. 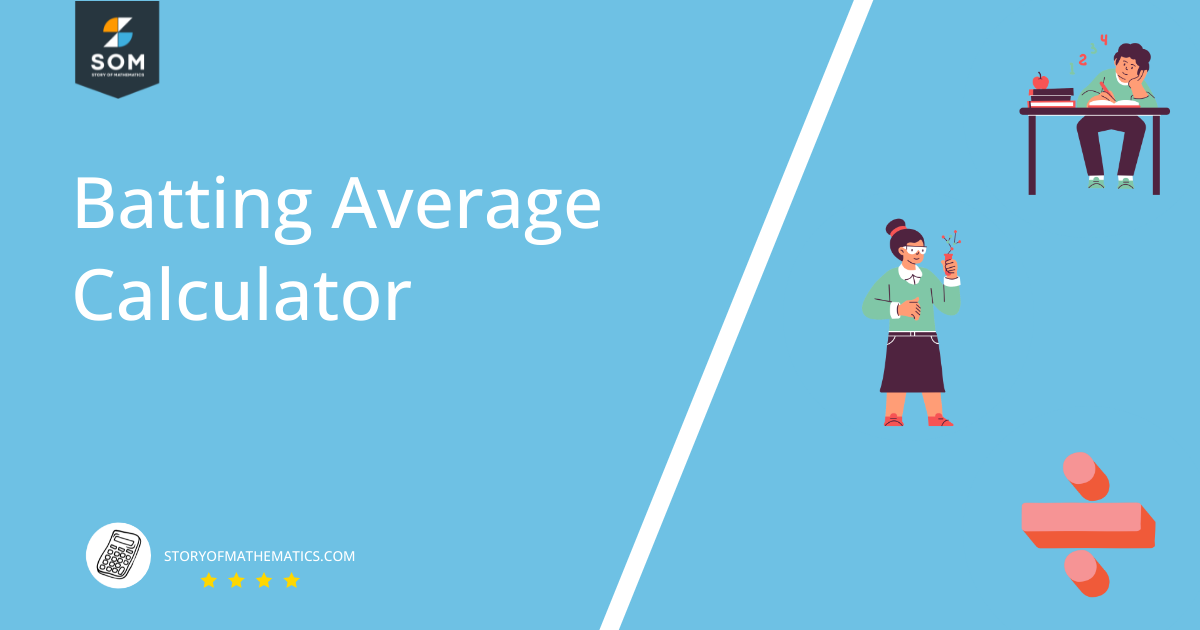 What Is the Batting Average Calculator?

A Batting Average Calculator is an online tool that evaluates the “batting average” performance metric for baseball. A baseball player’s Batting Average (BA) is defined as the ratio of the player’s total hits to the number of times they have been at bat.

How To Use the Batting Average Calculator?

You can use the Batting Average Calculator to find the batting average of a baseball player by entering the number of their hits and the times they were at bat.

For example, let us suppose we want to find the batting average of a baseball player with the following statistics over the last season:

To do so, the step-by-step guidelines for calculator usage are below:

Enter the number of hits/runs into the first text box. For our example, we enter “100” without quotes.

Enter the number of outs in the second text box. In our case, type “300” without quotes.

Press the Submit button to get the player’s batting average.

The results show in a new pop-up dialogue box with three sections. The sections marked with a star ‘*’ do not show in the cricket definition as they are related to values less than one.

The result for our example is 0.333, which is considered an exceptional score in baseball. Therefore, all three result sections show, and we conclude that the player has great skill.

How Does the Batting Average Calculator Work?

The calculator works by using the concept of batting average. The term “batting average” refers to a metric used in cricket and baseball to gauge a player’s performance.

It is considered largely independent of team-based factors and a good measure of individual skill though direct skill comparisons on this basis are discouraged.

The metric was originally designed for cricket. There, it defined the ratio of the player’s runs to the player’s dismissal count, often shortened to “runs over outs.” The formula is then:

Here, ‘R‘ denotes the number of runs, and ‘O‘ is the number of outs. If the batter is not out in an inning, the batting average is not calculated for that inning since it involves a division by zero.

In baseball, BA maintains the claim of representing batter skill independent of team factors and represents a modified version of the cricket definition: the number of hits over the player’s time at bat. This is represented as:

Note that the batting average can indicate a player’s performance over their entire career or over some season or series (for which the data is readily available). Additionally, in cricket, BA is usually always greater than one, while in baseball, it is always less than one.

Note that batting averages are rounded to two decimal places in cricket and three in baseball.

Currently, a seasonal batting average of 0.300 is considered good, while an average above 0.400 is almost non-existent. Historically, there have been players who have hit as high as 0.440. The disappearance of the 0.400 batting average in recent times is usually attributed to changes in the sport’s official rules and technology.

The usual batting average of a professional batsman is around 20 to 40, with above 50 being considered an incredible achievement. Note that these are career-wide figures.

Again, note that the batting average is not exclusive to the batsman. Therefore, there is usually a significant gap between the batting averages of players who are mainly good at bowling compared to those whose value is primarily in batting.

Exceptional bowlers in cricket history have had batting averages as low as 5 to 7. Under normal circumstances, a player with such a low batting average is considered a risk for the team. On the other hand, all-rounders fall in between the usually expected score of a professional batsman.

Here are some examples regarding this topic.

In 1941, Ted Williams of the Boston Red Sox ended the season at 185 hits for 456 at-bats. Find the batting average for Williams this season.

Given that Williams hit H = 185 times and his number of times at bat AB = 456, we can find the batting average as:

Donald George Bradman is known to have participated in 52 test matches in his career. In total, he participated in 80 innings and finished 10 of them as not-out. Given that he scored 6,996 runs, what is his batting average?

First, we find the total number of innings Bradman was not-out since BA is defined only for complete innings (the batter was out by the end):

The batting average is then: