The graph of the tangent function is periodic but discontinuous.

While the sine graph and cosine graphs are continuous and have a wave shape, the tangent graph is undefined at points where cosine is equal to $0$.

Before reading this article, read up on the sine graph and the basics of the tangent function.

How to Graph Tangent

To graph the tangent function, find the value of tangent at major quadrantal angles first.

Since tangent is equal to the sine ratio divided by the cosine ratio, it helps to first consider the values of these functions at the quadrantal angles.

The sine of $\frac{\pi}{2}$ is $1$, and the sine is increasing on the interval $(0, \frac{\pi}{2})$. Cosine is positive on this interval and decreases to $0$. This means that the tangent will be positive and will get larger and larger as cosine decreases. Thus, the limit as tangent approaches $\frac{\pi}{2}$ from the right is positive infinity. 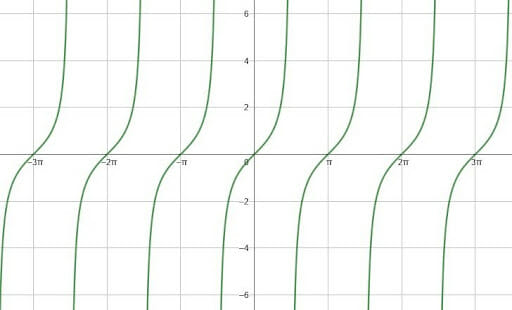 What is the Period of a Tangent Function?

Their sign values, however, are the opposite on each of these intervals. But, since tangent is equal to sine divided by cosine, its sign is the same over each of these two intervals. The sign of sine and the sign of cosine will still either be the same as each other (resulting in a positive tangent) or opposite to each other (resulting in a negative tangent).

This section goes over common examples of problems involving tangent graphs and their step-by-step solutions.

Find the intervals over which the tangent graph is positive and negative on the segment $[0, 3\pi]$.

What is the period of a transformed tangent function of the form $y=tan(bx)$?

Like sine and cosine, the period of a transformed tangent function is the original period length divided by the coefficient of $x$. Since, in this case, the initial period is $\pi$, the new period will be $\frac{\pi}{b}$.

This function has a vertical shift of $+1$. This means that the flat part of the function will cross the line $y=1$ instead of the x-axis.

Additionally, the function has a vertical stretch by a factor of $2$. Thus, all of the tangent values are multiplied by $2$, and the function will grow to infinity and minus infinity more quickly. 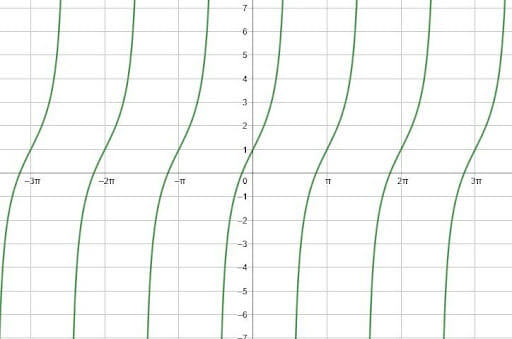 What is the equation for the tangent function shown? 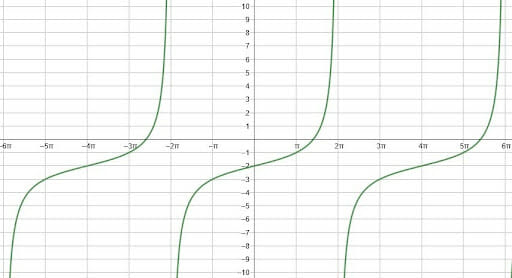 These functions will actually be the same.